This marks the federal territory having an MP from a Sabah-based party after almost 30 years.

The last Sabah party to manage Labuan was PBS in 1986 before its MP Datuk Abdul Mulok Awang Damit joined Umno in 1990.

Rozman said he quit Umno because he believed Sabah, Labuan and Sarawak were a union that should not be apart.

“It is also to ensure that Labuan continues to develop in various aspects, especially in economy,” he said yesterday, adding that the current political changes opened up new opportunities and possibilities for Labuan.

“After considering the needs of the people and listening to advice from many quarters, I decided that I must not let the people of Labuan be left behind.

“The only way to make sure that we stay relevant is for our administration to be in sync with the government of the day,” he said.

Rozman wants Labuan to work together with the new leaders in fighting for Sabah’s rights in accordance with the Malaysia Agreement 1963 (MA63).

“Labuan is actively involved in the oil and gas industry as a logistic hub, as well as tourism, but there are still so many untapped aspects we can look into,” said Rozman.

Warisan deputy president Datuk Darell Leiking, who welcomed him to the party, said Warisan had accepted Rozman’s application as the party was keen to work with the MP immediately.

“There are many things that we need to do for Labuan and the people.

“Of course, the first thing people will be asking is about the proposed Labuan bridge.

“The issue will be fought for by Rozman as well as Sabah. Give us some time,” he said. 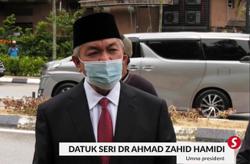