PETALING JAYA: A viral message concerning “new legislation passed in Parliament” about anyone caught using a mobile phone while driving is fake.

The message, which has been circulating recently on messaging apps in Malaysia, claims that anyone caught using their phone while driving or while their engine is running will lose their licence on the spot for three months.

It also says that in the following months, police will fine those who use their phones while crossing or standing near the roads “$150” – not RM150.

“They have assigned Aetos staff with some SPF backup at various traffic junction and pedestrian crossing, etc. Quite a few ppl were seen being stopped and fined. Spread this info. Esplly teenagers and womenfolk, as these seem to be the majority of those were caught in recent days,” continues the message.

The message first went viral in Singapore a few months ago, where it has also been proven to be fake and was debunked by The Straits Times of Singapore.

Malaysians are spreading the fake message, despite all the clues that it originated from Singapore. Aetos was established in 2004 following the merger of three auxiliary police forces in Singapore, while

In Malaysia, under Rule 17A of the Road Traffic Rules 1959, the offence of using mobile phones while driving carries a RM300 compound.

From January to October 2017, the Road Transport Department (JPJ) recorded a total of 4,129 cases of motorists caught using mobile phones on the road. 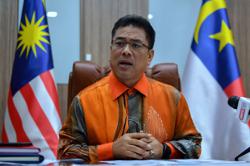