KUALA LUMPUR: Stage 4 cancer patients say they are deprived of targeted therapies in government hospitals due to limited public funds.

They want the Government to make the treatment available to patients like them, which could prolong their lives, and not just provide palliative care.

Cancer patient Jess Lau, 55, said she was terribly upset when doctors at a government hospital and a university hospital did not want to treat her spine.

She said the oncologist at the university hospital told her: “Just take morphine. Soon, you will be in a wheelchair. You kept changing doctors? Are you afraid to die?”

The mother of three then went to a private hospital and the doctor put her through a PET Scan and she later underwent intensity modulated radiation therapy (advanced mode of high precision radiotherapy) in 2015 to stop cancer growth in the backbone.

When she could no longer walk due to nerve damage and the doctors in a government hospital would not administer further treatment for her, she returned to her private oncologist and was put on a six-cycle chemotherapy (eribulin) which costs RM40,000.

She said she had exhausted most of her Employees Provident Fund.

“The Government should provide these targeted therapies because patients could live for many more years,” she said, adding that many patients in developed countries survived Stage 4 cancer for a longer time due to available treatments.

Lau noted that one of her friends had survived Stage 4 breast cancer for eight years following targeted therapies costing RM1.6mil in total.

With the treatment, besides prolonging her life for four years already, Lau said she had avoided a backbone or hip fracture.

“I am also able to walk and do house work.

“I want to see my youngest son graduate,” said Lau, who was first diagnosed with Stage 1 cancer in 2000.

A government worker in her 50s, who declined to be named, said she initially received targeted therapy treatment at a university hospital after she was diagnosed with Stage 2 breast cancer in 2008.

Her treatment went well and she went back to teach.

When her cancer returned a few years later and spread to her liver, she sought treatment in a university hospital or the National Cancer Institute (IKN) but was told that it was given only to first timers and younger patients.

She then went to a private hospital for a second opinion and was put on an 18-cycle chemotherapy with paclitaxol and targeted drug trastuzumab, and the tumours in the liver cleared.

Later, her oncologist suggested she try a new targeted drug, trastuzumab emtansine, which cost RM18,000 per cycle, as a preventive measure.

She was fortunate that she was offered a compassionate package for her treatment if she paid the first three cycles of it.

Despite doctors giving her three months to live, the HER2-positive patient has survived for four years since being diagnosed at Stage 4 cancer following the treatments she received. HER2 patients have aggressive cancer cells.

“My results have been amazing,” she added.

“I know of a few friends treated in government hospitals who passed on within two years without further treatment and those in private hospitals still living an active life after metastatis, like me, because we received treatment,” she said.

He promised to look into getting the generic version of trastuzumab for women with breast cancers who need the targeted therapy after Pink Ribbon Wellness (L) Foundation founder and chairman Datuk Dr M. Devanand urged him about it.

The treatment costs RM130,000 with the originator medication but the generic is half the cost. 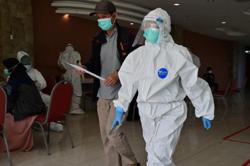