PETALING JAYA: Five schools have been ordered to close from the 830 schools nationwide affected by the contagious hand, foot and mouth disease (HFMD) as at July 25, says the Education Ministry.

“These schools will be closed for 10 days, including the weekend,” the ministry said in a statement yesterday.

In order to prevent the spread of the disease, the ministry has been adhering to the advice it received from the Health Ministry.

There were 469 premises nationwide which had been closed, including 217 nurseries and 223 kindergartens.

The Education Ministry, Social Welfare Department, National Unity and Integration Department and Housing and Local Government Ministry are working together with the Health Ministry to resolve the matter.

Meanwhile, it was reported on Wednesday that all states except for Sarawak had shown an increase in the number of HFMD cases.

“We also urge teachers at kindergartens or daycare centres to watch out for HFMD symptoms and to ensure children with HFMD stay at home so that they do not infect other children,” she said at the Selangor state exco building yesterday.

According to data provided by the Health Ministry, there were 10,479 cases of HFMD in the state for the week ending July 21.

This high number, said Dr Siti, could be attributed to Selangor being densely populated.

“Cases are rising all over the country, but for Selangor it could be because we are densely populated. So infection spreads easily,” she said.

A total of 320 childcare centres, kindergartens and nurseries have been directed to close to be cleaned up, said state Health, Environment and Agriculture Committee chairman Dr Sahruddin Jamal.

“Parents are advised not to send their children aged below 12 to childcare centres and schools if they show HMFD symptoms,” he said in a statement yesterday. 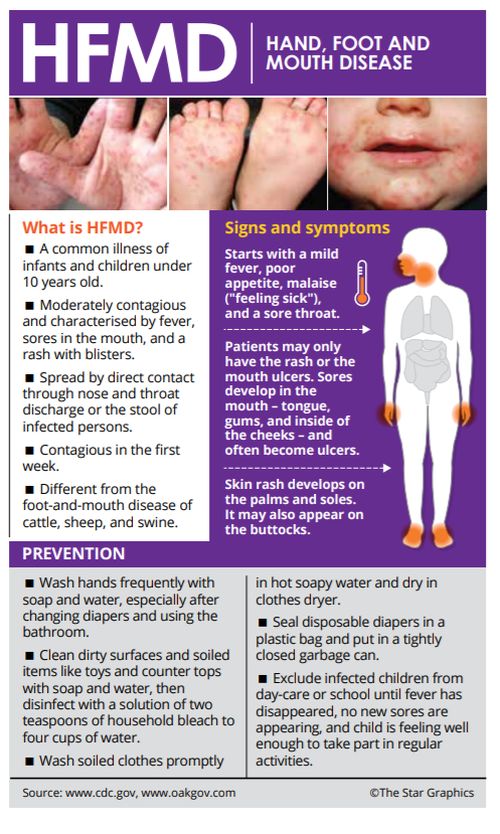 Parents on ‘standby’ in case disease spreads to other classes

All taska can open their doors again