THEY are the superstars on your social media feed, getting thousands of “likes” and comments with just a selfie.

With hundreds of thousands of followers on Instagram and Facebook, such social media influencers are more than just the popular people online – they play a role in affecting what we buy too.

Retailers and businesses across the board have taken notice of this, of course.

And all agree there is a large potential to be tapped in roping in social media influencers to take brands further.

But while some influencers are self-employed or run their own businesses, there are those who endorse products while being fully employed.

And they have been warned by the Malaysian Employers Federation (MEF): If they get caught “moonlighting” as an influencer, they may need to face the music from their bosses.

There is no denying the power such individuals wield today, though.

Currently, there’s a 132.9% mobile phone penetration rate in Malaysia, based on data from the Malaysian Communications and Multimedia Commission.

Influencers could certainly reach Malaysian users, whose top online activities are text communication (96.3%), browsing social media (89.3%) and getting information (86.9%), according to the Internet Users Survey 2017.

Out of those who visit social networking sites, 97.3% have Facebook accounts, followed by Instagram (56.1%), says the survey.

Malaysia Retail Chain Association president Datuk Seri Garry Chua agrees that influencers are important for businesses today and many retailers have included them in marketing strategies.

Although they may have an impactful role, the results also depend on the personality.

“Influencers are strong marketing tools but this is reliant on the person’s likeability or unique character.

“Even our Prime Minister (Tun Dr Mahathir Mohamad) can be considered an influencer, albeit unintentionally.

“After he was seen with certain products, it created a buzz online,” he laughs, referring to a photograph of the 93-year-old, who was seen with a tube of effervescent Vitamin C while wearing a popular brand of sandals. 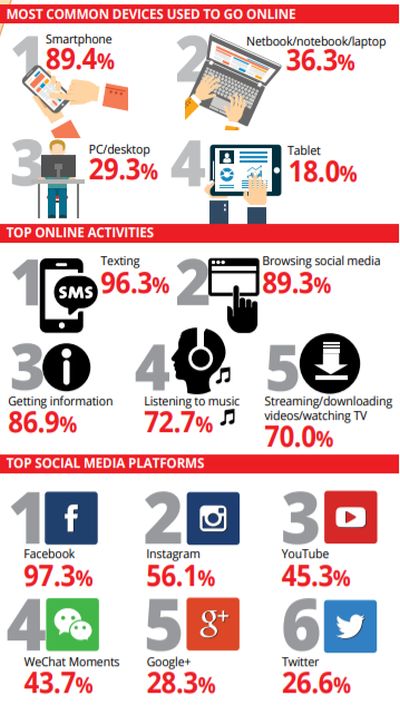 After the photograph went viral, brands and outlets were seen promoting such products on social media.

Netizens were equally amused and inspired, with some even claiming they wanted to buy the same stuff only to be told they were sold out.

Chua highlights the speed and efficiency at which messages spread online, with social media rapidly sharing information, be it through Facebook Live or Instagram.

“With digital and online marketing being the future, all kinds of industry players should be aware of such potential,” he says.

However, he hopes influencers will use their wide reach positively and not abuse their popularity to mislead others.

“We must be watchful for those who have been paid to run down competitors or paint a certain product in a negative way,” Chua warns.

He hopes that influencers will be responsible in sending messages to their audience.

“Businesses who want to hire influencers should also exercise good judgment in choosing the right individual,” he adds.

And the right influencers will play a big role in the future of promoting brands, says L’Oreal Malaysia consumer products division head of digital Vysia Yong.

“Influencers have a different value because they are the voice of consumers.

“They can help us craft better campaigns and products. We also get live feedback in the process.

“Through them, we can reach communities we couldn’t reach before,” she adds.

“Ultimately it’s all about their audience, so we have a tool that gives us insight on the gender, age range, location, specific interests and even tells us the ratio of fake followers to genuine ones,” Yong explains.

The influencers also have to be a right fit for the brand in terms of values.

“Typically, we send influencers products for review, and it’s their prerogative whether they post it or not.

“We value authenticity, so we do not dictate what they write about. If it’s a sponsored review, they have to disclose that it’s sponsored,” she says.

For paid influencers, the company treats them like media partners, tracking the impact of working with them.

As more users are approached to endorse products online, it has become an alternative career option for those who boast a high number of followers.

But he warns that such individuals should beware if they have day jobs.

“If this person is fully employed, they could run into problems as employers demand 100% loyalty from their workers.

“So, those who want to be social media influencers should be careful.

“If they want to do this professionally, they should quit their existing job or become the boss of their own business,” he says.

But there is no denying the growing trend of promoting products and services through such charismatic individuals online.

“If you read some reports, the general election was partly won through influences on social media.

“So, their role has potential to grow even bigger in future.

“This is especially with individuals who have established their name and built a brand around themselves,” Shamsuddin notes.

But perhaps one of the drawbacks of being a full-time influencer is that one may not have a stable employer and no social security.

Shamsuddin proposes that the Government draw up a policy on the new realm of social media influencing.

“Perhaps the Government can offer a form of security for influencers including covering them under the Employees Provident Fund.

“Or, if they are contracted for their service, they should be able to file any complaints at the claims tribunal should there be any default in payment,” he suggests.

However, more research is needed on the emergence of social media influencers.

Institute of Marketing Malaysia (IMM) president Datuk Sharifah Ismail points out that studies on these social media stars are scant as it is still a new area.

“There is no comprehensive studies or proven track record of the impact of social media influencers on businesses so far.

“But we will be very keen to look at such research.

“If given the opportunity and funding, we would be happy to conduct such a study for the benefit of businesses in Malaysia,” she tells Sunday Star.

This is especially timely since businesses are now shaped according to customer intimacy, not just experience.

“Influencers will encourage such ‘intimacy’, which includes feelings like trust and loyalty to a brand.

“Such individuals will be able to position the product in the right perspective to inculcate these sentiments,” says Sharifah, who heads the IMM that consists of over 100 corporations in Malaysia.

Also, at a time when everyone is “glued” to their handphones, social media influencers have a large potential in reaching customers.

Generally, Sharifah says categories like food and beverage, children products like toys, fashion, cosmetics and lifestyle products like holiday packages, will do very well with the aid of social media influencers.

However, while they can reach a bigger pool of customers in promoting brand awareness, there’s a lack of data on whether such marketing efforts will translate into actual sales, she says.

“I am keen to see how these media influencers can bring us to the next level of digital marketing,” Sharifah says.

Influencing as a career