Sabah Agriculture and Food Industries Ministry to crack down on overspending

Minister Junz Wong said that almost every year, HPPNS expenses exceed the budget set for it, up to the point that the unsettled debt has to be brought forward to the next year.

“The debt from last year has to be paid using the HPPNS allocation for that particular year. For example, this year’s budget was RM700,000, but only RM200,000 is left for the upcoming HPPNS,” Wong told reporters after delivering his address at the ministry here on Thursday (June 7).

He said he did not wish to point fingers to any parties and just wants to work towards resolving this issue within two years.

“We must correct this matter. I’m instructing that for this year and for the years after, the cost of organising HPPNS does not exceed the budget,” said Wong, who also announced that this year’s do will be held in Tawau.

The HPPNS has always been held by the ministry in Kota Kinabalu, except for 2009 when it was organised in Sandakan.

On the way forward for the ministry, Wong, who commenced duties on May 17, said the diversification of food crops, especially those with potential to be commercialised and marketed, will be among its plans.

He said this approach will ensure a wide variety of potential sources of food, raw materials and income, as well as providing farming communities across the state a higher level of self-sufficiency.

Wong said he will also propose that oil palm plantations to also be planted with other food crops.

“The Agriculture Department has already conducted research for various crops, such as coconuts, pineapples, durian and mangosteens,” he said.

Some of the challenges identified by the ministry, however, includes the lack of infrastructure, technology, marketing and planting material.

“I will propose these matters to Chief Minister Datuk Seri Mohd Shafie Apdal,” he added. 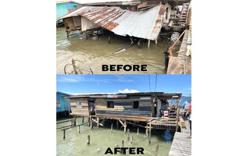