AT 7am on May 10, Pakatan Harapan chairman Tun Dr Mahathir Mohamad woke up coughing badly, but he was determined to put on his best to be sworn in by the King as the seventh prime minister of Malaysia after battling all odds to topple the Barisan Nasional government.

This fourth premier (from 1981 to 2003) had declared before the May 9 general election that his return to active politics after 15 years was to oust the administration of former premier Datuk Seri Najib Razak, clean up the government and “save Malaysia”.

However, before the 92-year-old was sworn in as premier for the second time at 10pm that day, the King gave PKR president Datuk Seri Dr Wan Azizah Wan Ismail an audience and offered her the premiership as the PKR symbol was used by Pakatan in the polls.

But the honourable politician told the King she had to abide by a pact among the four parties in the Pakatan coalition that Dr Mahathir – who had played the most crucial role in whipping up national support for a change of government – should be the premier.

Everybody is aware that if the May 9 election had been contested under Wan Azizah’s leadership, it was highly probable that Najib’s Barisan coalition would have continued to rule the country.

Despite all the obstacles and delays in his appointment, Dr Mahathir survived the strenuous day although his fingers were seen shaking, due possibly to fatigue, as he was waiting for the arrival of the King. 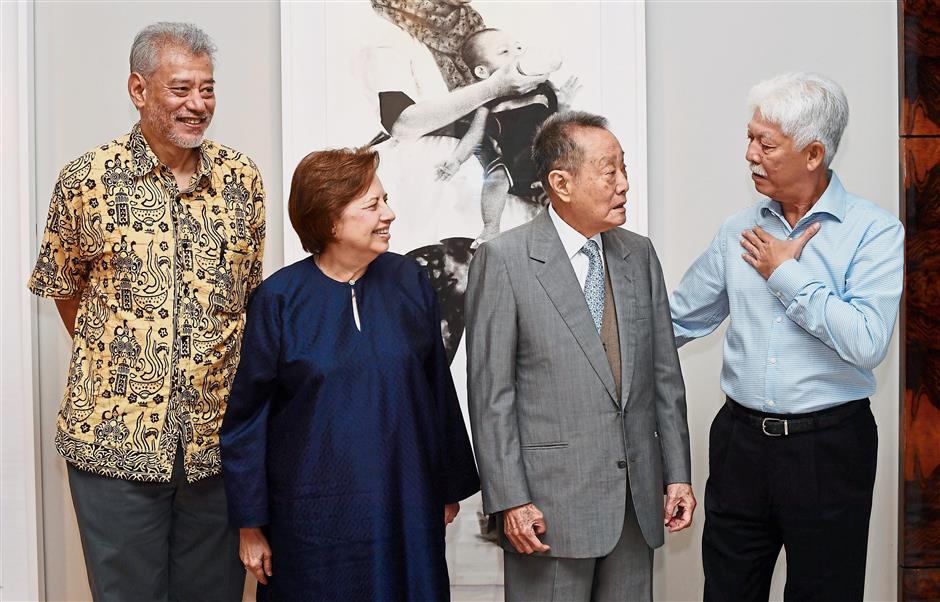 He knew he must get sworn in smoothly to ensure there was no political upheaval, as this was the first time in 61 years that Malaysia saw a total change in government after the fiercest campaign in its electoral history.

On May 12 – the day Dr Mahathir announced the names of three most important posts in his new Cabinet – former Opposition leader Lim Kit Siang was seen in casual wear buying food items at a mini-market.

Despite devoting his life to opposition politics and being instrumental in persuading DAP to work with Dr Mahathir – who had jailed Kit Siang and other DAP politicians before – this 77-year old politician did not demand a Cabinet post.

He told China Press there were enough talents and capable people to be ministers, but as adviser to DAP he would continue to push for reforms to create a better multiracial Malaysia.

On May 16, Dr Mahathir fulfilled his pledge to get a full royal pardon for his ally-turned-foe-turned-ally Datuk Seri Anwar Ibrahim, the premier-in-waiting and husband of Dr Wan Azizah.

The freed PKR de facto leader, jailed several times under Dr Mahathir’s previous rule, announced he would give full support to the new government led by his former nemesis. Anwar, again jailed in 2015 by Najib on politically-motivated sodomy charges, accepted Dr Mahathir’s invite over a year ago to work together to oust Najib, after the senior politician admitted his past errors and showed commitment to reforms.

Indeed, these acts of statesmanship displayed by the key leaders in Pakatan have convinced many people that they have made the right decision to overthrow Barisan.

“Dr Mahathir, Anwar and other top leaders of Pakatan have come to an agreement that national interest will come first, party and personal interest second. Our country is being run by statesmen now,” says a jubilant Tan Sri Lee Kim Yew, a close friend of Dr Mahathir. 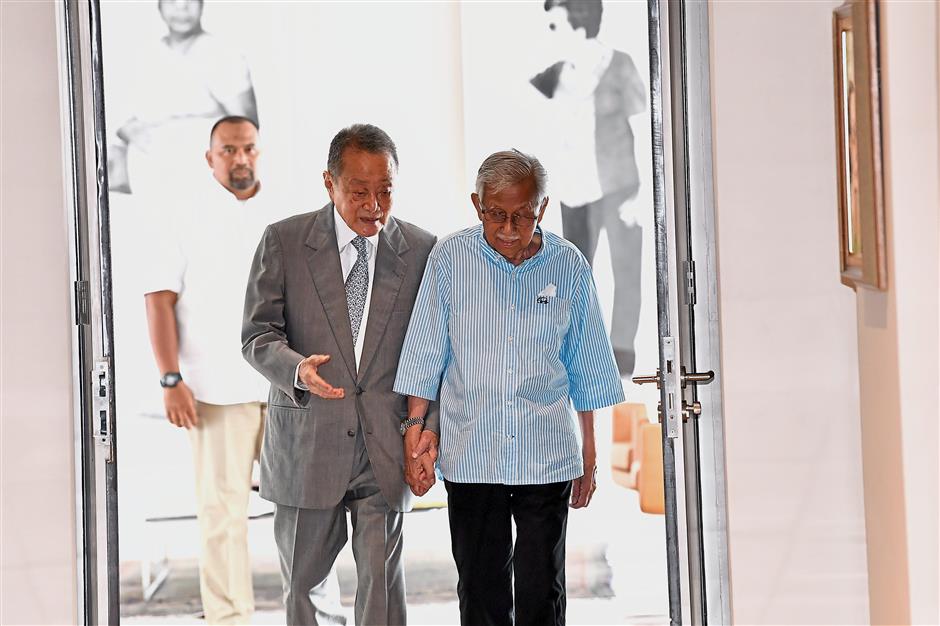 “Did you notice that when Anwar was freed, there were more Jalur Gemilang (national flag) fluttering in the air, rather than PKR flags, to welcome him out of jail?” he adds in an short interview with Sunday Star.

Trust in the leadership of Dr Mahathir has certainly grown stronger after he assumed the top post, judging by the positive comments made by the people in general.

As a new premier, Dr Mahathir moved quickly to name respected Pakatan leaders to his Cabinet and began the tough job of cleaning up the government and introducing reforms.

“As Dr M unveils his plans and measures, emphasising accountability and transparency, there is a greater trust in him. We believe he will do a good job,” says a business community leader who declined to be named.

“People have confidence he will manage the country wisely this time and will not repeat past mistakes. Indeed, our Singaporean counterparts are looking forward to invest in the new Malaysia,” adds the businessman, after attending a Malaysia-Singapore forum in Kuala Lumpur last Tuesday.

When ruling the country as the fourth Prime Minister, Dr Mahathir was known to grant contracts to his cronies without assessing their capability and track record. This was one reason some privatisation projects, such as Perwaja Steel, failed miserably.

The 1981-2003 period also saw the arrests of key political figures and dissidents, stifling of the media, rise of racism and religious extremism, weakening of the judiciary and politicisation of education.

But at the same time, Malaysia rose to become one of four Asian tigers due to high economic growth.

However, many Malaysians chose to remember only his flawed policies. And it took a while for many voters to be convinced that he has become a changed man.

His choice of Cabinet ministers this time has added a breath of fresh air into the new Malaysia, as this is the first time Malaysians see respected politicians with calibre and multi-racial outlook being picked.

A leader with an outstanding track record is DAP secretary-general and former Penang Chief Minister Lim Guan Eng, whose two-term rule of this northern state has won praise from many quarters.

Dr Mahathir’s government is also acting to book culprits involved in the massive 1MDB scandal and to bring back the stolen money and assets stashed overseas.

The new premier, who leaves his home at 7.45am everyday to go to Putrajaya, also wants mega projects to be reviewed so that the country’s debts and possible liabilities – close to RM1.1 trillion – can be pared down.

He has promised to lead only for two years, before passing the baton to Anwar.

In managing the country that has been shunned by Western investors due to the 1MDB scandal, Dr Mahathir sees the need to restore confidence by roping in respected and independent minded professionals.

The inclusion of Hong Kong-based Kuok and former critic Jomo into the council has been a pleasant surprise.

Kuok, an international business icon who advocates meritocracy, has shown disdain towards the New Economic Policy actively promoted during Dr Mahathir’s past rule.

Due to his high connections in China, Kuok is expected to play a role in mending the uneasy bilateral ties resulting from the current review of China projects here.

But Kuok may not be as controversial as Jomo, a fearless critic of Dr Mahathir and Daim in the 1990s when he was an economics lecturer in the University of Malaya.

He was one of the first to allege that Dr Mahathir and Daim had promoted cronyism and nepotism to benefit only a few business cronies.

The composition of the council shows Dr Mahathir’s resolve to select the best to help put the nation on the right track.

This has instilled confidence and trust.

“The council comprises very fine Malaysians. They are excellent people. Trust them, trust them,” Kuok told reporters on Tuesday when he first returned to attend a CEP meeting.

After congratulating Dr Mahathir for “saving Malaysia”, Kuok was told by the premier: “We need your help.”

From the brief exchange, it is clear that the road ahead for Dr Mahathir and his colleagues will not be easy.

There are already voices emerging that the Government should not be “overtelling” the corruption cases and 1MDB scandal kept under the carpet by the previous administration.

On Wednesday, the stock market reacted badly after Guan Eng revealed the national debt had hit over RM1 trillion, or 80% of the gross domestic product (GDP).

The KLCI plunged 40.78 points or 2.2% to close at 1804.25 points, due mainly to fear that Malaysia’s credit rating could be cut by international rating agencies.

The previous government had stated that the national debt was at 51% of the GDP, below the perceived danger level of 55%.

On Thursday, the KLCI continued its fall.

But Dr Oh Ei Sun, senior advisor to Asian Strategy and Leadership Insitute (ASLI), opines investors must understand that the new leaders are working “doubly hard” to investigate scandals and to introduce reforms.

“The markets have to catch up with these reforms with a more open mind, and the business community must realise that such reforms would make Malaysia a more attractive business environment,” says Dr Oh.

As Pakatan leaders have taken over the administration, they are expected to cast away their opposition style and start learning the ropes of managing the country fast.

To achieve a united Malaysia, they must look after the interests of all Malaysians, including those who have not voted for them, regardless of race, religion or political leaning.