PETALING JAYA: The Government will reopen the case of the cattle-breeding project under the National Feedlot Corporation (NFC), which is also known as "cowgate".

Salahuddin is cited as saying that the reopening of the case is in line with the Pakatan Harapan manifesto to reexamine cases with alleged misappropriation.

In a live broadcast on Astro Awani on the same day, Salahuddin, who is also Amanah deputy president, said that the NFC project would be re-branded to avoid confusion with previous projects.

He said his ministry has identified plots of land at Segamat and Muar in Johor to build farms.

“In Johor, there is no problem (getting land). I have a good relationship with the Johor Mentri Besar (Datuk Osman Sapian), and I will talk to him about this,” he said.

The original NFC project was the centre of a scandal in 2011.

Instead of beefing up cattle breeding, Rafizi alleged that the money was instead used to buy luxury condominiums, a luxury car and holiday packages.

The Auditor-General’s Report also described it as “a mess” and poorly managed, meeting only 41% of its target to breed 8,000 head of cattle for 2010.

It was also alleged that most of the beef it produced was sent to luxury restaurants owned by Shahrizat’s family.

In November 2016, Rafizi lost a defamation suit and was ordered to pay Salleh and NFC RM200,000 in damages for claiming that NFC had purchased the luxury condo with a bank loan.

In Feb 2018, the Sessions Court sentenced Rafizi to 30 months in jail for exposing banking details relating to the NFC scandal.

Rafizi has said that this shows the information he revealed was correct, though it was an offence to reveal it under banking laws.

The court, however, allowed a stay of the sentence pending an appeal. 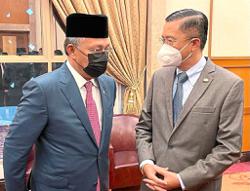