Mat Sabu slips up on protocol, but has good grasp on duties

KUALA LUMPUR: Mohamad Sabu was nervous on his first day as the country’s new Defence Minister.

But he was clear on the scope of his responsibility, saying he would not just listen to hearsay in studying his ministry’s expenditures and issues.

“Of course I was nervous. My everyday life has been spent with the people, but now I must follow certain rules and protocol,” said Mohamad, who officially reported for duty at the ministry in Jalan Padang Tembak here yesterday.

“It is something new for me and I will have to adapt.

“But I don’t want to change the ‘Mohamad Sabu style’,” he added as he bantered in his usual humorous manner with reporters during his first press conference at Mindef here.

In a statement issued later, Mohamad apologised for not pausing to pay respect to the ceremonial colours of the First Battalion of the Royal Malay Regiment while inspecting the guard of honour during his welcoming ceremony at the ministry.

“Since today (Tuesday) is my first day, I am learning the aspects of military protocol.

“God willing, I will try to do my best for the Defence Ministry and the Malaysian Armed Forces as a whole,” he said in the statement.

During the press conference, Mohamad said internal investigations would be conducted on any issue and scandal connected to the armed forces before action was taken against those involved.

These issues included the purchase of the Scorpene submarines.

He said he needed to get information on all Malaysian Armed Forces (MAF) services before looking in detail at internal issues.

“If there are issues and scandals with evidence obtained from detailed investigations, internal audits and – if necessary – external audits, we will investigate.

“If it is serious, we will take it to the Cabinet. We will not act wildly based on what we hear,” he added.

Mohamad said all policies benefiting MAF staff would be retained, while those with weaknesses would be improved or discussed with the top brass.

“If any weaknesses are found, we will fix them together,” he added.

On the setting up of the King Salman Centre for International Peace, Mohamad said he would discuss it with the Prime Minister before a decision was made.

Mohamad, who is Parti Amanah Negara president, was among the 13 Cabinet ministers sworn in before Yang di-Pertuan Agong Sultan Muhammad V at Istana Negara on Monday. 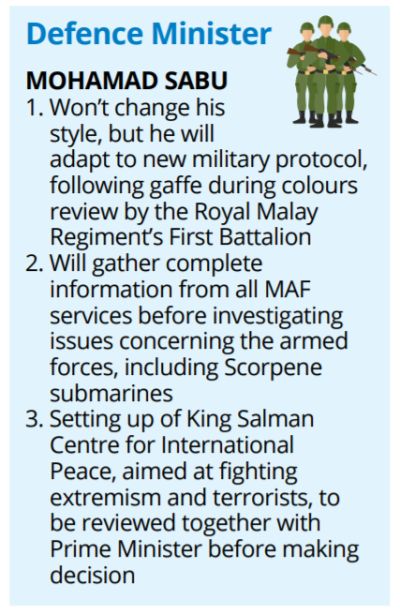