By TARRENCE TAN and JUSTIN ZACK PETALING JAYA: The field was muddy and soggy from the heavy afternoon downpour, but that did not deter a large crowd of Malaysians from gathering in Padang Timur to catch a glimpse of Datuk Seri Anwar Ibrahim.

Some even brought along tikar (rolling mats) for their own comfort and solat prayers, as the gathering is expected to drag on for a few hours.

The mood is joyous as vuvuzela horns and cries of “reformasi” dominated the atmosphere, which bore an uncanny resemblance to the 48-hour Bersih 4.0 rally in 2015.

Pakatan’s Muslim supporters was also seen performing their prayers on top of prayer mats at the site of the field despite the soggy conditions.

It was also a carnival-like atmosphere, as at least 20 stalls comprising of food trucks and hawkers trading Pakatan merchandise and vuvuzelas were seen here as early as 4.45pm.

Anwar is said to reach Padang Timur at 10pm and he is expected to give his first speech at 10.45pm tonight after spending more than a decade behind bars.

Anwar, the 70-year-old PKR leader, had walked out of the Cheras Rehabilitation Hospital 11.30am on Wednesday a free man after spending a total of eight years in prison over two sodomy charges.

He had also been detained in the 1970s as a student leader.

He was finally freed following a full and immediate pardon by the Yang di-Pertuan Agong Sultan Muhammad V after the Royal Pardons Board meeting.

Anwar was initially scheduled to be released on June 8, 2018 after his five-year sentence that started on Feb 10, 2015 was reduced for good behaviour.

Anwar's first sodomy charge was in 1998, when he was the deputy prime minister and protégé to the then-prime minister Tun Dr Mahathir Mohamad.

Following the charge, Dr Mahathir sacked Anwar from Cabinet and it then triggered the formation of PKR and the reformasi movement.

Anwar was found guilty and sentenced to jail in 1999, but was released in 2004 after his sodomy verdict was overturned.

In March 2014, Anwar was sentenced to another five-year jail term for a second sodomy charge. That sentence would bar him from contesting in GE14.

Despite that, Anwar remained as PKR's de facto leader and had played a role from behind bars.

Pakatan’s shock victory in GE14 had then paralysed Barisan Nasional and the subsequent return of Dr Mahathir as prime minister had stunned the world.

Yesterday (May 15), Dr Mahathir in announcing Anwar’s release, said that the 70-year-old would have to contest a parliamentary seat after being pardoned and could then possibly be appointed to the Cabinet.

Speaking at a Wall Street Journal event in Tokyo via video-conferencing, Dr Mahathir said he would continue to serve as Prime Minister for “maybe one or two years” before stepping down to make way for Anwar.

Dr Mahathir added that he would later play a role “in the background” after stepping down. 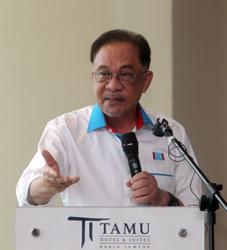