WITH his shock victory in Malaysia’s election, Tun Dr Mahathir Mohamad has pulled off a political second act that few expected, joining the select ranks of politicians who have revived their careers.

The 92-year-old former strongman ruled Malaysia for more than two decades before stepping down, but returned to political life to challenge his own former party, snatching a surprise win in Wednesday’s general election. 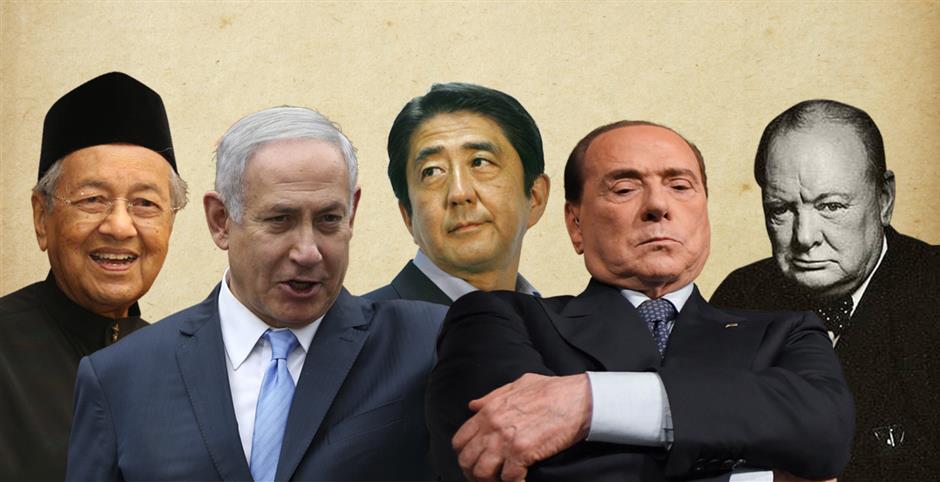 Comeback kids: Like Dr M, other political figures have had second and even third acts during their careers, including (from left) Netanyahu, Abe, Berlusconi and Churchill

Here are some other political figures who have had second, and even third acts during their careers:

Winston Churchill is revered for leading Britain from the verge of defeat to victory in World War II, but his political career was far from smooth sailing.

Churchill was forced to resign from government in 1915 after the disastrous Gallipoli campaign, and his eventual return to the cabinet was contentious.

Appointed prime minister in 1940, he won acclaim for his rousing leadership during the war, but suffered a shock defeat in the 1945 election and was forced into the opposition.

In 1951, he won a second term as prime minister, but resigned several years later as his health deteriorated.

The ups and downs of his career have been cited as inspiration by other politicians looking for their own turnarounds.

Shinzo Abe became Japan’s youngest-ever prime minister when he took office in 2006 at the age of 52.

But he resigned after just a year, hit by scandals and political disappointment and debilitated by health issues.

In 2012, he made a shock political comeback, returning to office on a pledge to revive Japan’s economy with his signature “Abenomics” programme.

He has said he was encouraged to seek a path back to power by reading a biography of Churchill entitled Never Despair.

After a first two-year term, he returned to power in 2001 following a campaign in which he sent a book boasting of his achievements to 15 million Italian homes.

He lost power in 2006, but returned to office two years later, only to see his premiership go down in flames over sex scandals and a financial crisis.

A tax fraud conviction means he is now barred from office, but that didn’t stop him seeking to become a kingmaker by backing a protege in March elections.

The gambit failed, with the ever-confident former cruise ship crooner attributing his party’s poor showing in large part to his absence from the ticket.

A divisive figure at home and abroad, Israel’s Benjamin Netanyahu has nonetheless proven a political master.

He became Israel’s youngest prime minister when he first won office in 1996, but was ousted just three years later by the opposition Labour Party.

He returned to government as a minister with his right-wing party in 2002, eventually winning a second term as prime minister in 2009. He has since earned the nickname “King Bibi”, fighting off a series of challengers despite the notoriously fractious and treacherous nature of Israeli politics.

Written off multiple times over corruption scandals and criticism for his brash and undiplomatic style, he is now Israel’s second longest-serving prime minister, and the only one ever to be re-elected three times in row. — AFP