Patrolman had to calm panicked woman while in troubled waters

GEORGE TOWN: He didn’t just save her, he had to also “counsel” her during their precarious moments in the rough seas.

“She was so afraid and crying uncontrollably. She told me all her problems,” bridge patrolman Zaidi Salleh said.

“I told her it was okay; I told her to calm down as I reached for her.”

He was recounting Wednesday’s drama in which the 28-year-old woman jumped off the second Penang Bridge.

Zaidi and his partner responded to the emergency after being alerted to it by another patrolman.

Zaidi tied a jerrycan to his waist as a flotation device and rappelled down before he dived into the sea.

Both Zaidi and the woman were in the waters for about 40 minutes before a fisherman’s boat came to their rescue. 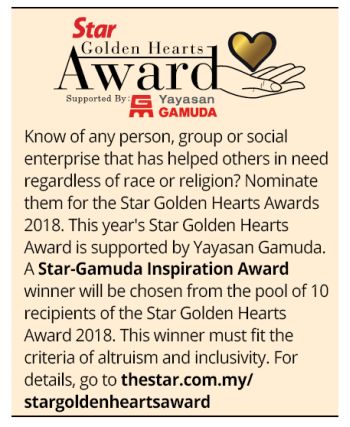 Yesterday, Zaidi described how the woman was clinging onto the barnacles growing on a pillar of the bridge when he reached her.

She started to cry after he got hold of her. According to him, she also blurted out her family problems then.

However, Zaidi said he could not pay full attention to what she was saying as he was focused on keeping them both afloat.

He said he also did not want to pry further into her problems to avoid getting her more emotional.

“She was panicking and was really afraid when I got hold of her.

“So I told her to calm down and to not struggle further, as it would make it even more difficult for both of us,” he said.

And while waiting for help, Zaidi told her that every problem had a solution and that she should surrender everything to God.

Now, he plans to visit her in about a week.

“Let her settle everything with her family first. I hope she will get better soon.”

The woman is now being treated at Sungai Bakap Hospital. It is learned that she is a former PhD student with excellent academic results but is facing financial problems.

Zaidi, who was a sergeant in the Royal Malaysian Air Force Ground Defence Regiment for 25 years, said he had been trained in first aid and other survival skills.

“I am trained to handle these kinds of situations. But this was my first time facing a real situation,” he said.

Asked about him resorting to using a jerrycan and a car-towing strap, which he tied to a lamp post on the bridge to get down into the waters, he said he had to act swiftly using the items he had with him.

“It was an automatic reaction,” he added.

He said he was humbled by the compliments heaped on him since then.

“I’ve been getting numerous phone calls appreciating my action. There are many news reports highlighting the incident.

“I’m glad that our quick action had saved a life. Nothing else matters more than that for me,” he said.

At the Penang police headquarters yesterday, Zaidi and two other constables with JKSB – Mohamad Fitri Abu Hassan, 29, and Megat Taufik Megat Kamaruddin, 29 – were given certificates of appreciation and cash rewards.

“Zaidi and his comrades made a fast decision in this kind of situation. This showed that they have a positive attitude and outstanding courage as the sea was deep and choppy,” said state police chief Comm Datuk A. Thaiveegan.

Later, at a press conference, Comm Thaiveegan said 44 people had jumped off Penang Bridge since 2011 while four other cases were recorded at the second bridge.

The police, he said, had opened an investigation paper against the woman. Attempting suicide is against the law.