It’s shaping up to be a WhatsApp election

REFILE - CLARIFYING CAPTION Silhouettes of laptop and mobile device users are seen next to a screen projection of Whatsapp logo in this picture illustration taken March 28, 2018. REUTERS/Dado Ruvic/Illustration

PETALING JAYA: In 2008, it was the blogs. Five years later, it was Facebook.

That was how the Internet and social media in particular had dished out political news and views in the past two general elections.

And now, WhatsApp will be taking centrestage in the coming polls, according to Barisan Nasional Youth executive secretary Zaidel Baharuddin.

Zaidel, who was a volunteer in the previous two elections, said the 2008 polls were held during the era of blogs, while in 2013, Facebook was the main platform for Malaysians to seek opinions and news.

In an interview, he spoke of Barisan Nasional’s loss of a two-thirds majority in Parliament in 2008.

The urban vote in particular reflected the fact that Barisan had lost the war on perception in those areas.

That was the year Barisan was caught off-guard but it has since learned from its mistakes, he said.

“So now we are going on Facebook, Twitter and other platforms. Also, recent studies showed that Umno now has greater traction on social media,” he said, quoting senior lecturer Ross Tapsell from the Australian National University as saying that Barisan has a stronger online presence compared with the Opposition.

Both sides have armed themselves with keyboard warriors.

Social media application programming interfaces (APIs) that can plug into platforms like Facebook and Twitter are being used to gauge public sentiment on any particular topic, Zaidel said.

According to Malaysian Communications and Multimedia Commission (MCMC) statistics, there are 24.5 million Internet users in Malaysia, or 76.9% of the population.

However, the challenge with WhatsApp is that there are no APIs that political strategists can use for analysis because its communication is encrypted, Zaidel said.

“In other words, even if we have access to WhatsApp, we still can’t gauge the sentiment of the public. We wouldn’t know what is shared among Malaysians because WhatsApp is encrypted from end to end. 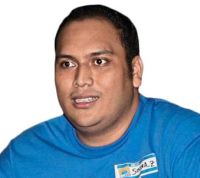 “I believe the polls will be a challenge for both Barisan and Pakatan. I call this the ‘encrypted election’,” he said.

The Digital News Report 2017 by the Reuters Institute for the Study of Journalism at Oxford University found that 51% of news consumers in Malaysia use WhatsApp to find, share or discuss news in a given week.

The study also indicated that Malaysia is the global leader for WhatsApp in terms of news consumption.

“You know what’s more popular than Facebook and Twitter? It’s WhatsApp,” said Zaidel, who is an electronics engineer.

He said the only way to increase WhatsApp reach is through organic growth.

“So, we have to make media that’s perfect for WhatsApp. That means compressed videos and pictures that can be easily forwarded around, But the challenge remains: We still don’t know how to gauge WhatsApp reach,” he added.

Sinar Project, a civic tech outfit that develops digital tools and conducts studies to promote government transparency and openness, agrees that WhatsApp will be a key platform in GE14.

And while it is concerned about the use of fake news in election campaigns, Sinar Project coordinator Khairil Yusof said that it will be highly unlikely that fake news creators or propagators can be brought to book, no thanks to WhatsApp’s end-to-end encryption.

“You can catch the person if there’s a snitch in the WhatsApp group. But the problem with rumours is finding the person who started them first, because once they become viral, it is almost impossible to trace the source of the fake news,” he said.

Khairil believes the only way to tackle fake news is to have government data that is easily understood and accessed by the public.

As an example, he noted that parliamentary documents, which are made available on the Internet, are filled with technical terms that ordinary Malaysians would find challenging to understand.

Khairil and his Sinar Project team are now furnishing new details on their MyMP website, which has been online since the 2013 general election.

The updated website will feature a directory of the profiles of each election candidate to keep voters better informed.

“The best way to counter fake news is to have better access to, and understanding of, facts and figures,” he said.

Johor DAP chief Liew Chin Tong, however, appeared unfazed over the prospects of fake news via WhatsApp being used against the Opposition, saying it relies on “peer-to-peer” campaigns by its supporters.

“It’s always peer-to-peer campaigns for us. This means ordinary people forwarding our materials and speaking to their friends and families.”

PKR strategy director Sim Tze Tzin also expressed similar views, saying that the Opposition can only rely on the people to “fight the menace of fake news”.

“The beauty of Malaysia is that everyone talks to each other and I believe that the general public is much smarter and will able to differentiate between real and fake news,” he said.