On the hunt for owner of ketum water ‘kitchen’

IPOH: Police are hunting for the owner of a ketum water ‘kitchen’ at Taman Pakatan Jaya here.

They were released on police bail.

“They only work there, preparing and packing the ketum water.

“We are now looking for the owner of the premises,” he told a press conference here yesterday.

Police also seized 440 packs of ketum water with an estimated total market value of about RM2,200. Visitors Norhashimah Tukimin (left) and Amy Chew taking a wefie with ‘Bumble Bee’, a Transformers robot, at the exhibition booth during the 4th International Energy Week 2018 at the Borneo Convention Centre in Kuching. 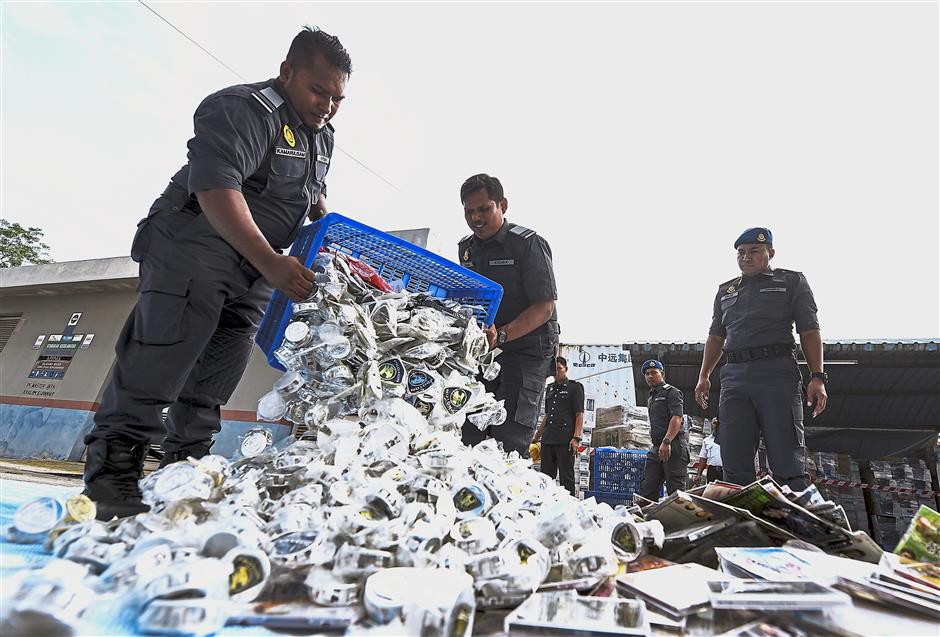 NILAI: Seized items worth about RM6.87mil were disposed by the Domestic Trade, Cooperatives and Consumerism Ministry enforcement officers at the Arab Malaysian Industrial Park here.

Five new fire stations  to be set up in Johor

JOHOR BARU: The state Fire and Rescue Department will set up five new fire stations, bringing the total number in Johor to 33.

Johor currently has 28 stations and three fire posts in the city.

The fire posts are located along Jalan Skudai, Kempas, and near the Bangunan Sultan Iskandar Customs, Immigration and Quarantine Complex here.

The new stations are expected to be ready and operational within this year, Othman told a press conference after attending the department’s yearly assembly yesterday. Reaping the fruits of labour

SRI AMAN: A rambutan grower (left) checking on the ‘anak sekolah rambutan’ he planted at his orchard in Rumah Helary, Nyelam, near here.

More than 10 villagers started planting the species of rambutan eight years ago.

However, as of 2017, only eight of them are still planting the local fruits at the Iban community settlement orchard about 30km from here. — Bernama

GEORGE TOWN: Police arrested two men and seized 4.4kg of drugs after they stormed an illegal drug laboratory in Desa Iswara in Relau.

Also seized were 383gm of heroin-based substances and 35,500gm of caffeine powder and various drug processing equipment as well as chemicals during the raid at 9pm on Sunday, said George Town OCPD Asst Comm Anuar Omar.

“The district anti-narcotics division had been monitoring the activities of the two suspects aged 33 and 34 for a few months.

“We also seized RM110,000 in cash and two cars from the house,” he said at a press conference at the district police station. yesterday.