An endangered sun bear was butchered into multiple pieces and sold as exotic meat at the Lubok Antu local market in Sarawak. - WONG SIEW TE.

In Kuching, a villager shopping at a local market got a rude shock when she saw a sun bear slaughtered into pieces and sold openly as exotic meat.

In the photo taken at the Lubok Antu 'pasar tamu' in Sri Aman Division, the adult male sun bear was butchered into over 15 pieces and placed on a table next to a weighing machine.

The head was decapitated below the chin while the arms were cut off at the forearm to keep the paws intact. An illegally hunted sun bear butchered and sold for RM20 to RM35 a kilogram at the Lubok Antu local market in Sarawak. - WONG SIEW TE.

"In the same market, a wild boar and sambar deer were being sold as well," he said, adding that the villager alerted him of the incident and sent him the photos.

According to Wong, poaching is rife but it is uncommon to see sun bears being sold openly in the local markets.

"For us, the festive seasons mean happiness and fun with family but for the many unfortunate wildlife, it means the end of their life when the demand for exotic meat soars," he said.

Sun bears are a protected species under the Sarawak Wild Life Protection Ordinance 1998 and those found guilty of hunting and selling the wildlife could face a RM10,000 fine or one year imprisonment. Police responding to the scene where a motorcycle failed to swerve in time and crashed into a sun bear on the East Coast Expressway 2. - MALAYSIAN RESPONSE TEAM.

Wong said the population of sun bears is unknown but conservationists are certain that it is declining due to rapid deforestation and rampant poaching.

He urged the Forestry Department to enforce the wildlife protection law and prosecute those involved in the illegal exotic meat trade.

"If we don't do anything effective soon it will be too late to do anything, just like the rhinos here," he said, adding that the extinction of sun bears will hurt the forest ecosystem.

In Terengganu, a sun bear was killed after a motorbike crashed into it near the Kuala Dungun exit on the East Coast Expressway 2 (LPT 2) at 6.50pm on Sunday (Dec 24).

The motorcyclist was en route from Kuantan to Terengganu when the sun bear suddenly crossed the road. 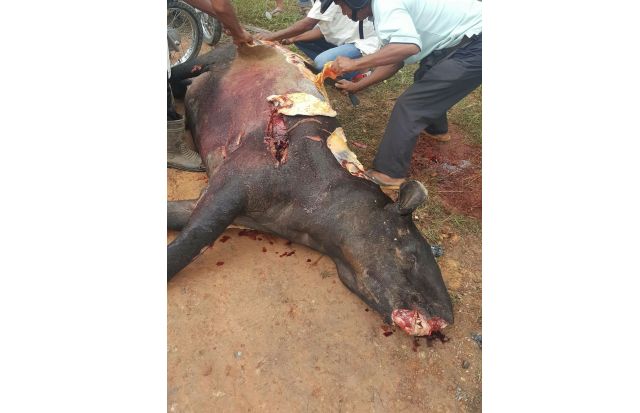 A group of men skinning and disfiguring a tapir that was killed in a car accident the night before in Gua Musang (Dec 24). - EDIEY KING.

In Gua Musang, Kelantan a 100kg tapir was killed in a car accident involving a Proton Saga at KM12 at Jalan Gua Musang-Kuala Krai.

The accident happened at 4am on Dec 24 but a group of men who found the tapir carcass the next day skinned the animal and cut off its snout.

Netizens have expressed shock and disgust of photos of the men skinning the wildlife, calling their actions cruel.