KUALA LUMPUR: Tenaga Nasional Bhd (TNB) has advised the public to be wary of those posing as TNB workers or contractors.

Its Public Relations and Internal Affairs general manager Datuk Omar Sidek said TNB workers must be in uniform (red T-shirt, blue jacket with logo and name) while carrying out their tasks.

“Inspections can only be conducted on the electricity meter. They are not allowed to make any inspection on wiring because that is beyond TNB's jurisdiction,” he said in a statement Thursday.

Besides that, a TNB staff member should produce his authority card (containing his photograph, identity card number, and employee number) to the premises' owner or residents, he added.

Two days ago, a newspaper reported that an elderly woman in Jertih, Terengganu, was robbed at her home in Kampung Gong Mak Som near Alor Lintah, by two men who had disguised as TNB staff.

Besut police chief Supt Mohd Zamri Mohd Rowi was quoted as saying, the suspects  pretended to check the electricity meter at the victim's house and asked the victim to bring her bill.

When the victim handed over the bill, the suspects grabbed the 61-year-old victim's necklace before escaping.

In July, a man disguised as a TNB staff member to steal a smartphone in an office at Jalan Kuchai Lama here. - Bernama. 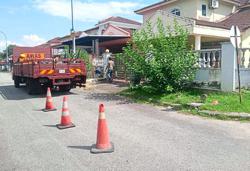