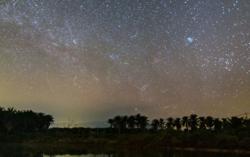 KUALA LUMPUR: The Perseids meteor shower will be visible over the night sky in the country at about 1.30am on Sunday (time and date corrected), according to the National Space Agency.

In a statement, it said that Malaysians would be able to see between 60 and 150 meteors an hour in areas free of light pollution during the phenomenon.

"However, the waning gibbous moon will make it a challenge to see the meteor shower clearly," it said, adding that the moon was expected to rise at 10.16pm on Saturday.

The Perseids meteor shower occurs annually between July 17 and Aug 24 when the earth passes through a comet's path and the comet dust burns when entering the earth's atmosphere. – Bernama