Business cards for my wife? It's fake, says Nazri 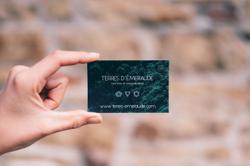 He said his ministry was not allowed to issue any type of business card to a non-officer.

"She doesn't work for the ministry. It is fake.

"There are always people out there who try to get us," Nazri said when contacted.

A photo of business card in the name of "Datin Seri Haflin S", bearing a small picture of her went viral on social media on Wednesday.

Her designation on the card is "Spouse-Minister of Tourism of Culture Malaysia".

The card also bears the address of the ministry's office in Putrajaya, together with contact numbers and an email address.

Attempts to contact Haflin by phone and though her Instagram page, which is locked, have been unsuccessful. INTERACTIVE: What we can tell from MySejahtera check-ins since travel ban was lifted
Giving a new concept of family
Muslims and non-Muslims live in harmony at village
MA63 amendment Bill to be tabled on Tuesday
Orphans receive benefits
Just mask up, KJ tells colleagues
Love blossoms for seniors at nursing home amid pandemic
Woman in nursing home dies of Covid-19 infection, not vaccine, says health director
Abang Johari: S'wak's MA63 struggles will further strengthen identity as part of Malaysian family
Melaka Polls: Umno, BN should be ready to face elections by themselves if no coalitions willing to cooperate, says Najib