Dangerous situation: Water being sprayed to dilute the gas concentration at the plant in Sipitang.

KOTA KINABALU: Two maintenance workers died and three others collapsed during an ammonia leak at the Petronas Chemicals Fertiliser Sabah Sdn Bhd plant in Sipitang, some 140km from here.

The five men were carrying out maintenance works at the plant when the incident happened at about 9.30am yesterday.

One of those killed was a Malaysian while the other was a foreign worker.

“The situation has been contained and this incident will not pose any threat to the surrounding communities or environment,” he said, adding that they were investigating the cause of the leak.

Meanwhile, Sipitang police chief Deputy Supt Ag. Md Arsad Ag Bakar said the bodies of the two victims have been sent for a post mortem while the three injured were receiving treatment at the hospital. 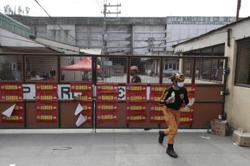