"Several measures have been implemented in stages since 2010 to curb the rise in household debt.

"This led to a decrease in household debt growth to 6.5% this year from 7.3% last year and 14.2% in 2014," Chua said when replying a question by Datuk Nasrun Datu Mansur (BN-Silam) in the Dewan Rakyat Tuesday.

Nasrun had also asked what was being done to prevent those between 25 and 30 from being declared bankrupt due to credit card debt.

Chua said credit card debt was not one of the main reasons why individuals were made bankrupt.

"The biggest reason why individuals are made bankrupt is not because they are unable to settle their card debt but because of personal loans.

As a precautionary measure, Chua said banks will only approve credit card applications of those who qualify.

Chua said some 204,000 individuals have taken part in the Power Finance Management Programme since 2010.

He also said that the Credit Management Agency had assisted 148,000 borrowers manage their finances in the same period. 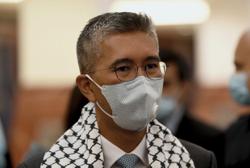