PETALING JAYA: The worsening air quality in the Klang Valley is triggered by the hot weather and several fires which include peat fires in Kuala Langat and Sepang, according to the Natural Resources and Environment  Ministry.

“The hot and dry weather also caused air pollutants in the air and worsened the haze situation today and yesterday,” it said in a press statement on Thursday.

The Ministry said that transboundary haze is unlikely to occur as the country is still in the monsoon season, which is expected until mid-May.

As of 3pm, the Air Pollution Index (API) showed an unhealthy reading which exceeded 100 in several areas in the Klang Valley.

“The current hot weather and an increase in nitrogen oxides (NOx) pollutants and Volatile Organic Compounds (VOC) have contributed to an increase in the API readings.

"Until April 20 (Wednesday), Klang and Kuala Selangor had seen no rain for eight days in a row according to a report by the Malaysian Meteorological Department,” the statement said.

The Ministry also urged the public to refrain from open burning and to be vigilant in not letting the land or premises owned by them to be used by irresponsible people for open burning, whether incidental, or for a particular purpose.

Those guilty will be charged under Section 29(A) Environmental Quality Act 1974.

They will be convicted of carrying out open burning to a fine not exceeding RM500,000 or imprisonment for a term not exceeding five years or both.

The maximum fine of RM2,000 will be imposed on each offence.

The public is also urged to extinguish small fires and to report cases of open burning to the Fire and Rescue Services Department at 999 and the Department of Environment (DOE) at 1-800-88-2727. 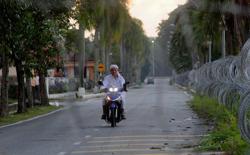