KLANG: The relevant authorities should consider using biological methods to counter the dengue epidemic in the country which is fast spiralling out of control.

Former president of the Malaysian Society of Parasitology and Tropical Medicine Assoc Prof Dr S. Vellayan said this method included the use of fish, dragonflies and genetically engineered mosquitoes to battle Aedes mosquitoes.

“The western mosquito fish known as Gambusia affinis, which eats mosquito larvae, can be released into drains, ponds and places with stagnant water.

“This method has been used in countries such as the United States, China and Cambodia to control the mosquito population,” said Dr Vellayan, who is with Universiti Teknologi Mara Puncak Alam’s Faculty of Pharmacy.

He said freshwater shrimps could also be used to control larvae from becoming mosquitoes.

According to Dr Vellayan, dragonflies, which are also being used extensively in Cambodia and some parts of the United States, could also be released in specific areas for the purpose.

“The dragonfly nymphs in the water eat the mosquito larvae and the dragonflies eat the adult mosquitoes,” said Dr Vellayan, who is a veterinarian.

He explained that genetically engineered mosquitoes could also be released to mate with Aedes mosquitoes and since the engineered variety was barren, there would not be any spawning of eggs.

“Mosquitoes infected with the Wolbachia bacteria can also be released to eliminate the Aedes,” he said.

When a male mosquito infected with Wolbachia mates with a female Aedes mosquito, her eggs will not hatch.

He added that the initiatives should be undertaken by the respective local councils and City Halls as the dengue menace was no longer a medical issue but an environmental problem.

Klang MP Charles Santiago concurred that dengue was now an environmental problem and as a result, the local councils had a bigger role to play since garbage and filthy surroundings were the biggest contributors to Aedes breeding grounds.

Santiago said some of the local councils in Selangor were slow and sometimes not receptive to suggestions and ideas given to them to counter the dengue menace.

To rectify this, he said Selangor Mentri Besar Datuk Seri Azmin Ali’s office should be directly responsible for dengue eradication activities if the state wanted to effectively counter the epidemic.

Selangor has consistently recorded the highest number of dengue cases in the country with 65,168 cases – almost 50% of the 120,836 cases recorded nationwide in 2015.

This year, Selangor again recorded the highest with 13,306 cases between January and March 2.

Out of the 55 dengue-linked deaths nationwide during the same period, 18 were from Selangor. 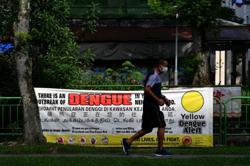 Taking the sting out of higher dengue cases