A heart for the Bosnians

THE sufferings of the people of Bosnia-Herzegovina during the Bosnian war between 1992 and 1995 attracted the attention of the international community and Malaysia was no exception.

More than 200,000 people died in the war and another 1.8 million went missing, but few nations dared to lend a helping hand fearing that they would spark more complex problems on the global level.

Malaysia’s position was different. The Government, which was then under the leadership of Tun Dr Mahathir Mohamad, chose not to turn a blind eye to problems in the Balkan peninsula.

With Datuk Seri Najib Tun Razak then serving as Defence Minister, Malaysia not only voiced its concern but also sent humanitarian aid to Bosnia as well as the country’s elite military squad, Special Service Group as peacekeepers in the warzone.

This was done before the United Nations (UN) had decided to send its own peacekeepers to the area. Once the UN got involved, Najib directed the formation of a peacekeeping contingent known as Malbatt (Malaysia Battalion) Command.

Deployed from 1993 to 1995 in Konjic, Jablanica dan Pazaric, the Malaysian peacekeepers were part of the United Nations Protection Force (Unprofor).

Following the signing of the Dayton Accord in 1995 which ended the Bosnian war, Malaysian forces were redeployed as Malcon (Malaysia Contingent) Command under the Nato-led Implementation Force (IFOR). In an operation called Joint Endeavor, Malcon troops were sent to Livno, Glamoc and Kupres.

As Defence Minister, Najib took a personal interest in the welfare and morale of the troops.

In May 1994, when the tensions on the ground were at its peak, Najib flew to Bosnia to visit the Malaysian peacekeepers. His presence in Bosnia was a surprise as no senior leader had visited the warzone up to that time.

Najib also displayed his commitment to the country’s troops when he became the first Malaysian minister to celebrate a festive event with soldiers overseas. He celebrated Hari Raya Aidilfitri with the Malbatt troops in Bosnia on 1995. 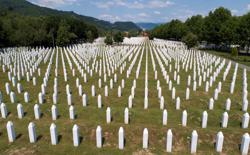