KUCHING: South-East Asia is not a hotspot for carbon dioxide release as its peatland rivers emit much less of the gas than previously assumed, a study has found.

Although the region has a lot of carbon-rich peat soil, researchers found that the amount of carbon dioxide released by its rivers was six times less than that from a similar ecosystem in the Amazon.

The study, which was conducted by researchers from two German universities, an Indonesian research centre and Swinburne University of Technology Sarawak Campus, measured for the first time carbon dioxide emissions from four peatland rivers in Sumatra and two in Sarawak.

Their findings were published in the Nature Communications journal last month.

Co-author Dr Moritz Mueller (pic) from Swinburne Sarawak said South-East Asia was thought to be one of three hotspots – along with the Amazon and Africa – for carbon dioxide emission from rivers because of its large areas of peat soils, especially in Malaysia and Indonesia.

“But what we found when we measured how much carbon dioxide was coming out from the rivers here, it’s actually much less than we expected. Based on the soil and common theories we expected a lot more, but it was about six times less than expected.

“In layman’s terms, the Amazon gives out about 125 units of carbon dioxide but we give out about 25 units,” he said when interviewed.

Dr Mueller said this finding was significant because it changed calculations about the global carbon cycle and how much South-East Asia contributed to climate change.

“We were very much surprised by the results. There’s a budget for the carbon cycle around the world, what gets released from what kind of ecosystem, from soil, rivers, the ocean, cities and what gets taken up by different areas.

“This study changes the one for rivers, especially from this region which was a question mark previously. Now we have the actual number and it’s much lower than we thought.”

The researchers’ main reason for the lower emission is that rivers in South-East Asia are relatively short, so there is little time for organic matter to decompose before it flows into the ocean.

“When the organic matter gets into the river and is released into the ocean, microbes have very little time to convert it to carbon dioxide,” said Dr Mueller.

However, he said the researchers did not know yet what happened to the organic matter in the ocean. “That is for follow-up studies.”

He also said other follow-up studies were being done to investigate the role of microbes as well as the human impact on the carbon emission process, as the first study measured emissions from rivers in the undisturbed peat soil in Sarawak’s Maludam National Park.

“We will look at differences between the natural site in Maludam and sites in Sebuyau and Simunjan which are surrounded by oil palm plantations.

“We now know that the natural state is not as bad as we thought, so we want to see what conversion to oil palm does to the process,” he added. 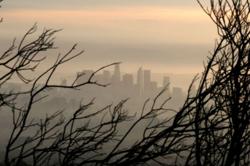