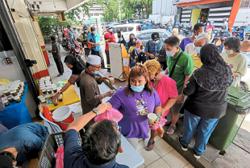 KUALA LUMPUR: A non-profit organisation has started preparing food packs for those who will likely be affected by the floods in the east coast.

Food Aid Foundation, an organisation that operates as a food bank, will be sending 4,320 food packs to Kota Baru this week as a standby measure.

Foundation founder Rick Chee said this year, they would be working with Malaysia Building Society Berhad (MBSB), which had contributed RM300,000 to the initiative.

Chee said the foundation found a store in Kota Baru to keep the food packs so they could be easily distributed to flood-hit areas.

“We will also be sending 1,200 cartons of mineral water to Kota Baru,” Chee told The Star.

Chee said Food Aid also helped out with post-flood efforts by setting up dapur rakyat (people’s kitchen) to serve 800 victims who started returning to their homes from relief centres.

The materials and equipment were brought in from Kuala Lumpur to Guchil, Kelantan.

“We were smart to plan ahead the materials needed, by deciding the menu in Kuala Lumpur itself.

“Even our meats were cut and packaged in KL and transported there for hygiene purposes.”

Mohamad Faisal added that they had 18 volunteers, including three banquet chefs, to help prepare the food.

Food Aid said they would do the same this year if the situation called for it.

They are also liaising with the police, People’s Volunteer Corps (Rela) and Fire and Rescue Department to help send out food to areas cut off by the floods.

“This year, we want to be better prepared. That is why we have decided to work with Food Aid,” she said.