I am not alone, says Najib

KUANTAN: Datuk Seri Najib Tun Razak has made his stand clear – he will not quit just because one person has demanded so.

The Prime Minister told a crowd of his supporters that he was an elected leader chosen by the people and Umno members.

“Just because one person is demanding it, I have to step down? I will not,” he said at the Kuantan Air Force Base yesterday.

Najib said he was not alone as he also had the support of Sultan of Pahang Sultan Ahmad Shah and the people of his own home state.

“Even Tuanku supports me. From the Ruler right down to the people. I am touched by this show of support and will continue doing my best,” he said. 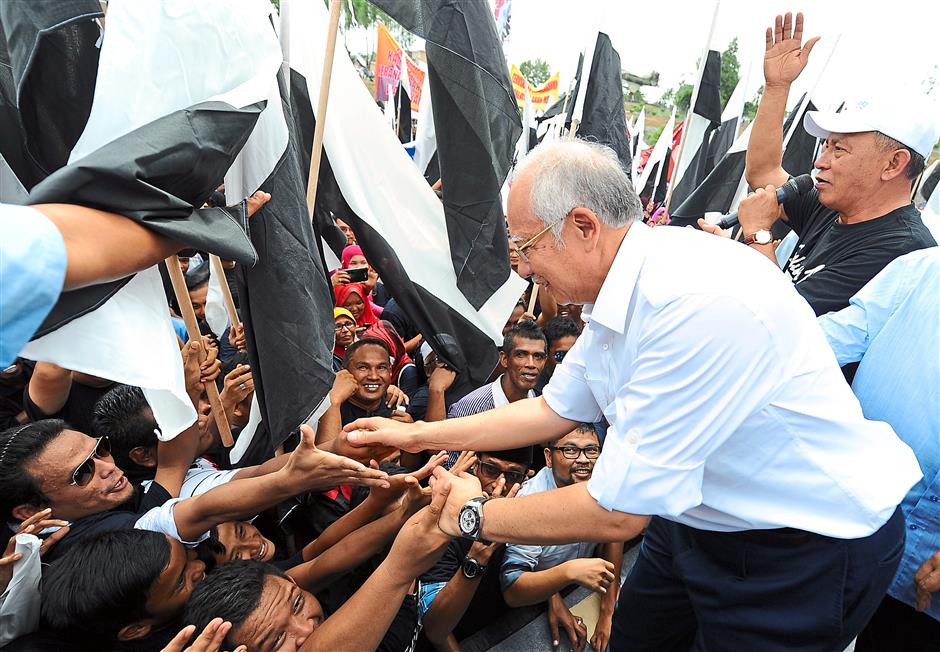 Making connections: Najib shaking hands with his supporters at a gathering in Kuantan. —Bernama

Najib said that based on feedback gathered from his visits to several states, he was confident the people would continue to support his leadership, adding that this would strengthen his resolve to serve the people.

“I know numbers are not everything but I can see the since­rity of those present. We will win because we work together and when we believe in our leaders, the party will get stronger.

“But when we fight among ourselves, God will take away our power,” he said.

The Prime Minister had earlier launched the Gegar Autoria automotive show in Pekan where a large crowd turned out, with many people carrying banners of support for him.

Najib said the Pekan district had undergone radical changes thanks to its automotive industry.

“With the presence of plants like Deftech, Volkswagen, Isuzu and DRB-HICOM as well as the Inter­national College of Auto­motive here, thousands of jobs have been made available.

“Imagine what it would be like without these facilities. Youths here would have migrated to the Klang Valley and other urban areas,” he said.

Before flying to Pahang, Najib addressed a gathering at the Rural Transformation Centre in Gopeng, Perak.

He said he was touched by the huge presence and warm reception of the crowd.

“This is not the time to ask people to step down from their posts but a time to unite in the face of the big challenges ahead,” he said.

He said that as a leader, he had to do the best he could.

“There are many Nujum Pak Belalang (soothsayers) who have claimed that Barisan Nasional would not win the 2013 general election in Perak. But Barisan has managed to win the state,” he said.

Barisan, he said, had showed it was united and planned the right strategies, and in the end, it won Perak in the elections.

Najib said that whatever complaints or concerns brought up by the elected representatives, they all came back to him eventually.

“From clogged drains to people getting kidnapped in Sandakan and the Rohingya boat people, all of these are the Prime Minister’s responsibility.

“I’m not trying to evade my duties but this a fact. Leaders have to face such problems, which hopefully with God’s strength I will be able to carry out for the people and country,” he said.

Najib said times had changed, adding that the ruling coalition now faced a stronger Opposition compared with when he took office in April 2009.

“This is different from an earlier era when there was no social media. In the past, there will not be any issues if something is not reported by the newspapers. Even sending poison letters was difficult.

“Now, with just a blog entry, tweet, or a posting on Facebook, everything can become viral. It takes only the press of a button to send poison letters.

“These are the challenges we have to deal with now and it’s time for us to unite and look at the country’s agenda to attain deve­loped nation status,” he said.

Najib said there were bound to be weaknesses in any administration.

“We are all humans, which is why I am asking for a chance for us to continue our fight as well as serve the people. If we do not fall apart, God will give us a win in the next general election,” he said.