The recorded crime index came down by 40% over the last five years since the beginning of the transformation journey under the Government Transformation Programme (GTP).

Do you trust the numbers?

This is my third article on crime. The first was on the different views of crime – reality versus perception.

The second was on the fear of crime comprising of the unsafe feeling and the probability of ending up a victim in an individual’s mind.

This article is on the numbers and I am expecting much feedback from readers.

Crime is the greatest public concern and yet there is no perfect methodology to show the full picture of crime.

The full picture is like an iceberg as a metaphor (Figure 1). 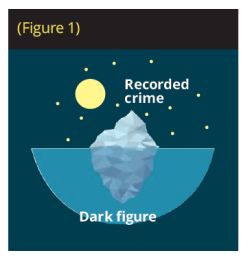 What is known is probably equal or less than what is hidden.

In reality, there are more crimes than we are likely to ever know.

There are two measures of crime:

> Official crime statistics – which are based on the aggregate records of offender and offences processed by the police, courts and prison agencies.

> Unofficial crime statistics – which are produced from surveys outside the criminal justice system.

Crime is usually understood as an act that contravenes a criminal code.

The criminal code distinguishes between different types of crime.

To determine the specific crime is quite technical as seen from the examples in Los Angeles and Boston on rape below.

Even though crimes are committed everyday, not every crime is reported by the public and recorded by the police.

Victims may not report crime for a variety of reasons.

They may consider the particular crime as a private or personal matter.

Alternatively, they do not think it is important enough or they fear reprisal.

Last year, we did a quick survey via crowd sourcing.

We gathered that about 25% of the crimes experienced by the public were not reported to the police. This is known as the “dark figure”.

The “dark figure” was one of the main criticisms when we published the crime index. To get a feel of the “dark figure”, we could do a victimisation survey like we did last year. 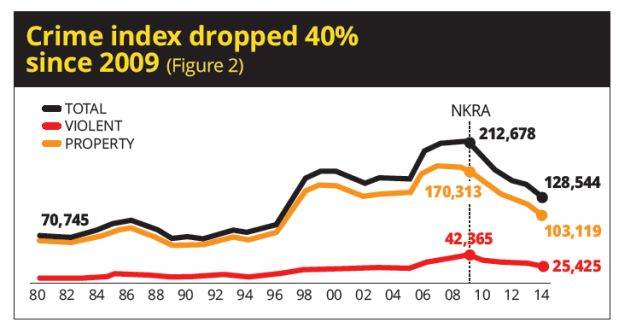 This gives us a feel but not the accuracy of the specific crime.

On the other hand, we have offence categories where the victims are compelled to file a report with the police.

Examples of such offences are where the victim can claim damages from insurance such as car thefts, house break-ins and so on.

Research has suggested that petty crime is likely to have a high “dark figure”.

A study showed as an example a “dark figure” of 7% for car theft and 70% for common assault. Theft from a person can be as high as 90%.

Understanding the measures will help restore trust among the public.

In measurement, we must have the “backbone of comparability”, meaning we can compare across countries and over a period of time.

In Figure 2, you can see the trend line of crime in Malaysia since 1980.

The treatment in measuring crime has always been the same.

It is not easy for the police – crime increased by about 5% per annum and at the same time we have the annual target of 5% reduction – meaning 10% reduction per annum.

This is consistent with international practices.

Violent crimes are crimes committed against a person.

Property crimes are those that have no direct threat or harm to a person. In total, there are 13 categories of crime in our crime index (Table 1).

Non-indexed crime are all other crimes – misdemeanours and other felonies such as fraud, embezzlement, gambling, forgery, prostitution, drug use violation and so on.

In any measurement, we need to have reliability and validity.

Reliability refers to the consistency and/or stability of measurement over time – just like in Figure 1 from 1980 to 2014.

Validity is concerned with the accuracy of measurement. We use recorded crimes without the “dark figures”.

From a scientific viewpoint, the measure is not precise. However, we are reporting the numbers that we know (recorded crime) and we have been consistent in this.

This is also the international practice. We can calibrate recorded crime with the victimisation survey.

The setback is that respondents may mistakenly report some non-critical events as crimes.

Furthermore, there may be a“telescoping effect” – the over reporting of the frequency of events.

I believe what is important is the ability to see the trend, the patterns of crime and take action to bring the crime down.

The numbers are reliable – we should not be paralysed and have an endless debate over the “dark figure”. For example, when we first started the transformation journey, one of the focus areas from 2010 to 2012 was street crime.

Having achieved good results, we then shifted our focus to house break-ins.

Table 2 shows the increase per annum on a block of five years since 1980. 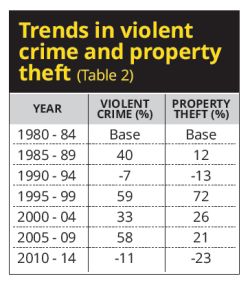 Violent crime has been increasing at a faster rate than property theft.

Within violent crime, our concern is the increase in gang robbery without firearms and rape.

In addition to the “dark figure”, we need to be mindful of the criminal code.

We refer to the criminal code to determine the offence.

This is not easy as violation of the law is more complicated since there are many laws in the system.

Different people may interpret things differently and we term this as the “classification” issue.

For example, the Los Angeles police recorded any attempted or completed sexual assault as rape.

The Boston police, on the other hand, recorded a sexual assault as rape only if it involved completed sexual intercourse.

Hence, the Boston rape rate was much lower than that of Los Angeles.

In Malaysia, pick-pocketing may be recorded as tercicir (misplacement) or house break-ins as “trespassing”.

Can we trust the crime statistics?

There are two things mentioned above – measurement and crime classification. The measurement is reliable and we can see the trend over time.

The validity can be challenged because of the “dark figure”.

Some may doubt if the classification is correctly done but these are random errors and probably insignificant.

There is no perfect methodology to give the full picture of crime.

Using the iceberg as the metaphor, recorded crime must come down.

My view is that whatever measure we use, whether it is the police crime index or the victimisation surveys, we must be clear on the purpose and approach taken to get those data.

The golden rule like in accounting – “the law of consistency” – must apply.

In short, it is not so much about the numbers but what we do about those numbers that matters.

If I may quote Harith Iskandar from his Facebook: “I appreciate all that PDRM are doing and I know it is a tough job. I personally know many personnel in the Police Force who work hard at their job and for the concern of the rakyat. As Malaysians, we should ALL do our bit to make this country a safer place.

Let us all focus on pursuing and catching the real criminals who physically hurt and terrorise ordinary Malaysians.”

> Datuk Dr Amin Khan is Director of Pemandu’s Reducing Crime NKRA. He can be reached at aminkhan@pemandu.gov.my. The views expressed here are entirely his own. Readers may also share their views at http://unitedagainstcrime.com.my