Malaysia's first Nobel Peace Prize: The Nobel Peace Prize 2013 award and certificate received by Nasarudin Mohd Yusof as a member of the Organisation for the Prohibition of Chemical Weapons.

PETALING JAYA: All that Mohd Nasarudin Mohd Yusof (pic) wanted to do after moving to The Hague, Netherlands, and joining the Organisation for the Prohibition of Chemical Weapons (OPCW) three years ago, was to make Malaysia proud of his service there.

Never did the 52-year-old retired Malaysian Armed Forces personnel dream that he would get a chance to fly the Jalur Gemilang high with a Nobel Peace Prize 2013 award for his work at the intergovernmental organisation that ensures member countries adhere to the Chemical Weapons Convention, which prohibits the use of chemical weapons and requires their destruction. 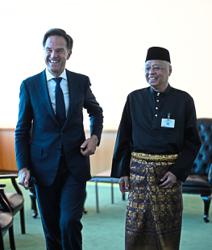