JERANTUT: A policeman was injured after he was slashed with a machete by a man in the 11.30am incident at Felda Kota Gelanggi Dua near here on Monday.

Jerantut district police chief Supt Azid Ismail said a police team went to the suspect's house to detain him following a report lodged against the man for allegedly threatening to kill his mother.

"Realising the presence of the police team, the suspect turned aggressive and wielded a machete at the policemen, during which one of them, Kpl Ahmad Irwan Benjamin, 31, was slashed on the arm and leg," he said at a media conference here on Tuesday.

However, he said, the suspect was apprehended soon after, and following a search in his room, police found a knife, a sickle and three machetes in a cupboard.

Also found was a red straw, believed to contain heroin, he added.

Supt Azid said the suspect would be remanded for a week, from Tuesday.

Kpl Ahmad was sent to the Jerantut Hospital for treatment. - Bernama 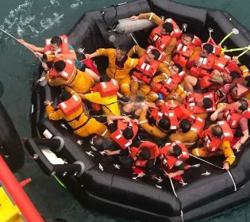