PETALING JAYA: Although crime is down for Jan-June 2013 compared with the first half of 2012, the number of murders and robberies with firearms has risen.
According to police statistics released by the Performance Management and Delivery Unit (Pemandu), indexed crime for the period of January-June 2012 totalled 76,247 reported cases. This dropped by 2,120 cases to 74,127 in 2013.
However, cases of violent crime increased from 14,811 to 15,098 over the same period. Of this figure, robbery (including gang robbery) with firearms also increased, from 69 cases to 74.
Murders rose from 291 cases in the first six months of 2012 to 322 cases in 2013.
The worst-hit month of 2013 so far was June, with 14 gang robberies with firearms and three robberies with firearms.
Indexed crime refers to crimes which occur with significant regularity. Violent crime is a sub-category of index crime, which includes murder, rape, gang robbery and robbery - both with and without firearms - and assault.
There has been a recent spate of high-profile gun crimes, which has caused concern among Malaysians.
Pemandu chief executive officer Datuk Seri Idris Jala announced late Thursday that the Government will work with the Attorney-General's Chambers to study the possibility of introducing new legislation to help in the fight against organised and violent crime.
"At this point, it is too early to provide any further exposition, but safe to say that a joint task force comprising the Home Minister, the Ministers in the Prime Minister's Department, the Inspector-General of Police and the Attorney-General, is assessing the specifics and options on how to ensure sufficient empowerment to law enforcement while ensuring necessary check-and-balances," Jala said in a statement.
In the meantime, immediate measures using existing laws have been put into place to curb violent and organised criminal activity. These include a new provision under the Criminal Procedure Code that will allow for the interception of communications to help law enforcement officers compile evidence against criminals.
The latest high-profile shooting was that of Arab-Malaysian Development Bank founder Hussain Ahmad Najadi in a car park in Kuala Lumpur.
Although Hussain was killed, his wife survived.
This came just three days after the attempted murder of anti-crime activist R. Sri Sanjeevan at a road junction in Jempol by two men on a motorbike.
These cases have strengthened the call of anti-crime activists, police, and lawmakers like Home Minister Datuk Seri Zahid Hamidi to reinstate the abolished Emergency Ordinance (EO).
Criminology Professor Dr P. Sundramoorthy of Universiti Sains Malaysia told The Star Online earlier that the EO should have been maintained "but amended so it cannot be abused".
"It's very possible that perpetrators know the police won't be able to detain them because they no longer have this tool and have no means of detaining them."
Anti-crime activist and Malaysians Against Rape, Assault and Snatch (Marah) founder Dave Avran said he was positive crime levels would remain high if preventive laws like the EO remain repealed, "primarily because of the psychological warfare against criminals."
However, Opposition members have maintained that crime declined the year the EO was repealed.
Although the EO was meant to police hardened criminals and underworld organisations, it was also used on everyday snatch thieves and, controversially, six Parti Sosialis Malaysia (PSM) members, including Sungai Siput MP Dr Michael Jeyakumar, in connection with the Bersih 2.0 gathering in 2011. 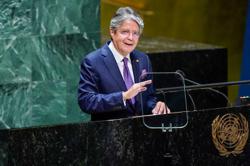