KUALA LUMPUR: RTM’s English and Mandarin news will be aired at 7pm and 8pm respectively over TV2 from today.

This follows the national broadcasting station’s decision to move the Mandarin, Tamil and English news from TV1 to TV2.

It was earlier announced that Tamil news would be given the 7.30pm slot.

“We are concerned with the people’s views and needs,” she said during a press conference at her ministry here yesterday.

Earlier, the Chinese community had urged the ministry to move Mandarin news from 6.30pm to 8pm as many people would not be able to reach home on time to watch the news.

Human Resources Minister Datuk Dr S. Subramaniam also had said that Indian viewers would not be home in time to watch the Tamil news if it remained at 6pm and this could prove to be a minus point in the Government’s effort to disseminate information about its policies and programmes to the community.

Heng said another 30-minute English news, Daybreak, would be aired daily at 7am while Galeri Perdana Mandarin would continue to be aired between 12.20pm and 12.30pm from Monday to Friday on TV2.

She said the ministry would study all programmes aired over TV1 and TV2 to ensure they serve the purpose of informing, educating and entertaining the public.

She said the ministry would also increase the slot time for locally-made programmes. 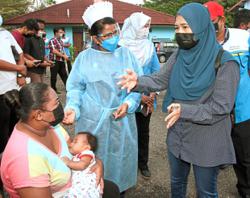