The document also read that all statements made were inaccurate and not the truth.

A visibly perturbed Balasubramaniam remained mum on Friday when met by pressmen who had rushed to a hotel here where his new lawyer Arulampalam Mariam Pillai accompanied him for the brief press conference. 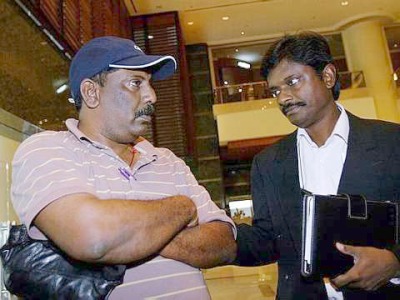 Dressed in a cap and T-shirt Balasubramaniam refused to answer questions posed to him and left quickly after his lawyer distributed the second statutory declaration to reporters.

Arulampalam also refused to entertain pressmen, giving only a brief statement that his client was under duress and that he was upset.

This included the fact that he had informed police what political analyst Abdul Razak Baginda had purportedly told him prior to Altantuya's murder.

The 10 statements highlighted in the second statutory declaration dated July 4 were:

* At no material time did Razak inform him (Balasubramaniam) that the former was introduced to Altantuya Shaariibuu by a VIP;

* At no material time did Razak inform him that Najib instructed Razak to look after Altantuya as he did not want her to harass him since he (Najib) was the Deputy Prime Minister;

* At no material time did Razak and/or Altantuya inform him that Najib, together with Razak and Altantuya had met and all been together at a dinner in Paris;

* At no material time did Altantuya inform him that she wanted money in the sum of US$500,000 as a commission for a submarine deal she "assisted" with in Paris;

* At no time whatsoever did Razak and/or Altantuya inform him that Najib met with Altantuya in Singapore;

* At no time whatsoever did Altantuya inform him that she wanted Balasubramaniam to arrange to see Najib;

* At no time did he tell the police during the course of their investigations about any relationship between Najib and Altantuya as no such relationship existed to his knowledge;

* At no time did Razak inform him that he had sent Najib an SMS the evening before he (Razak) was arrested; and

* At no time did Razak inform him that Najib has sent him an SMS on the day of his (Razak) arrest to the effect that he was going to see the IGP that day and that the matter should be resolved and for Razak to remain calm.