DAP rep thrown out of assembly

He was asked to leave after failing to adhere to the 50-year-old protocol requiring all 56 assemblymen to wear the official uniform.

Speaker Datuk Ali Hassan said at 9.30am that those not in official attire must leave the assembly, which was to start at 10.30am with the royal address by the Johor Sultan. 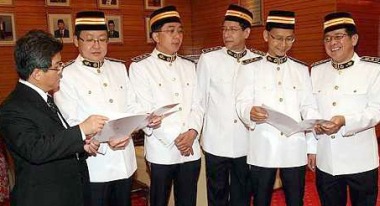 Gwee was the only assemblyman who wore a lounge suite and tie. The other 55, including three from DAP and two from PAS, wore their uniforms and songkok.

He then left the assembly and joined the media in another nearby room to watch the proceedings.

Asked why he did not wear his attire together with the songkok, he said: “I've already informed our DAP state chief about this”.

Gwee said he was ready to face the consequences and he still respected the Sultan.

“The other DAP assemblymen wore the attire so there is not reason why he cannot do so.”

Senai DAP assemblyman Ong Kow Meng said if Gwee did not want to wear the attire, then he should not have attended the assembly.

State DAP chief Dr Boo Cheng Hau, who is also the Skudai state assemblyman, said Gwee would have to bear the responsibility for his actions but added that the party would not be taking any action against him.