By TEH ENG HOCK 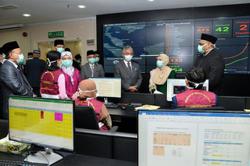 KUALA LUMPUR: Three Members of Parliament were among six people arrested Saturday for participating in a rally in front of Istana Negara here.

He said the police arrived at about 10am and asked members of the public, including tourists, to vacate the area around Istana Negara's main gate.

"Everybody left except for a group who refused to leave. We gave them three warnings to disperse. Deputy OCPD (Supt Azri Abd Rahman) spoke to them, and at 10.20am, I told gave them five minutes to disperse.

"At 10.25am, they still refused to leave so we arrested them. No force was used, and they did not resist arrest," he said.

At 10.35am, ACP Wan Bari said a group of 70 people, including about 15 children, alighted buses parked some distance away and walked towards Istana Negara.

"Each child was carrying a basket lined with yellow cloth containing flowers and a teddy bear. They left the baskets in front of the palace gate," he said, adding that they left after being asked to.

ACP Wan Bari said he could not comment further on investigations as "counter-reports have been made" against him for ordering the arrest of the six, and his comments would prejudice investigations.

“These children do not have their fathers with them for Father’s Day (tomorrow) and that’s why they gave the King flowers as he too is a father,’’ said Kannan.