KOTA KINABALU: Two men, who kidnapped a 22-year-old university student and raped and assaulted her during a 10-hour hell ride nine days ago, will spend the next 30 years in jail.

Sessions court Judge Duncan Sikodol in sentencing them said public interest demands that they be meted with severe punishment after taking into account their guilty plea and Sahrizal's age.

The prosecution led by Senior Federal Counsel Suhaimi Ismail urged the court to mete a severe sentence as they had taken away the “glow and shine of a young girl forever.” 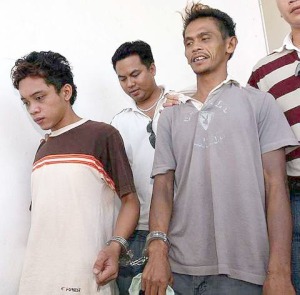 Public interest demands that they have to be punished severely, he said, as their action could not bring back the victim's virginity.

Suhaimi said the 22-year-old Universiti Malaysia Sabah student and her friends had just arrived at Kingfisher Park in a van to attend a religious function when the two in a stolen car approached her as she was walking behind her friends.

He said Sahrizal pulled the girl into a Kancil driven by Ariffin and they headed towards Kota Kinabalu City at about 6.45pm on April 15.

The two managed to flee towards the Kota Kinabalu – Tambunan old road and during the ride, Sahrizal tied the girl's hands with tape and tore her clothes. When she resisted, he punched, kicked and bit her numerous times before raping her.

Sahrizal forced her to perform oral sex on him before Ariffin raped her twice. The ordeal ended when their car overturned near Kampung Rompon in Tambunan after a police chase at about 4am on April 16.

Police found the girl in a state of shock inside the car while the two suspects managed to flee. Police in Keningau arrested them separately over the next 36 hours.

The defence counsel in mitigation said that the duo had no intention to assault the girl but did so because she struggled.