KUALA LUMPUR: Political analyst Abdul Razak Baginda has been charged at a magistrate’s court here with abetting in the murder of Mongolian beauty Altantuya Shaariibuu.

The 46-year-old Abdul Razak was accused of abetting C/Insp Azilah Hadri and Kpl Sirul Azhar Umar to commit the crime, which ended with the body of the 28-year-old Altantuya being blown to bits with explosives.

Abdul Razak, whose name was stated as Abdul Razak Abdullah in the charge sheet, was indicted yesterday - just a day after the two policemen from the Special Action Force (better known as Unit Tindakan Khas) were accused of killing Altantuya in Shah Alam.

Abdul Razak is alleged to have committed the offence between 9.54am and 11.05am on Oct 18 at Level 10, Bangunan Getah Asli, 148, Jalan Ampang, here - the official address of the Malaysian Strategic Research Centre, of which he is the head.

He was charged under Section 109 of the Penal Code read together with Section 302 of the same code.

If convicted, he will be sentenced to death.

The complainant in this case was stated as Namiraa Gerelmaa, a friend of the victim.

Before Abdul Razak was brought into the courtroom yesterday, suspense filled the air. All eyes were on the lock-up, when a creaking sound was heard from inside at 12.42pm.

A few minutes later, the lock-up door opened and the political analyst emerged wearing a light blue, long sleeved shirt and dark pants, similar to what he was wearing when he was first remanded on Nov 8.

As Abdul Razak stepped out, his wife Mazlinda Makhzan embraced him, and lay her head on his left shoulder.

She then gave her tired-looking and unshaven husband a light kiss on a cheek before uttering something to him.

Abdul Razak, who was handcuffed, was then ushered into the dock by the courthouse’s officer-in-charge Asst Supt Zulkifli Osman. He took his seat before one of his counsels, M. Puravalen, spoke to him.

As the lawyer briefed him, the tired look on Abdul Razak’s face slowly turned into a frown.

During the proceedings, which lasted barely five minutes, the political analyst put on a pair of glasses before the charge was read to him.

After the interpreter finished reading the charge, Abdul Razak nodded to indicate that he understood it.

However, no plea was recorded from the political analyst and bail was also not offered.

Aizatul allowed the request but did not fix any date for mention.

DPP Salehuddin later told reporters that the prosecution would apply for the case to be jointly heard in Shah Alam, together with the murder charge against C/Insp Azilah and Kpl Sirul Azhar. 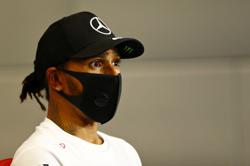 Mercedes knew Hamilton was in trouble before Russian GP start