KUALA LUMPUR: Norhailini Yahya would normally turn up for work early to get a choice parking spot.

She would then take a nap in her car until it was time for the day’s work to begin.

Yesterday, it all went horribly wrong.

The 45-year-old mother of three, acting vice-president of the CIMB Investment Bank Bhd’s legal department, arrived at her office near Jalan Semantan about 6.30am, parked her car by the side of a road overlooking a 25m drop, put on her steering wheel lock and settled down for a snooze.

What really happened would never be known, but it is believed that Norhailini accidentally stepped on the accelerator, causing the car to surge forward and off the road, plunging to the ground below.

The car, a Kia Rio, landed on its roof, trapping Norhailini inside. Security guards working in the area turned the car back on its wheels and tried to rescue Norhailini, who at that time was still alive.

However, the car was too bent out of shape and Fire and Rescue Department personnel who arrived shortly spent 20 minutes cutting through the wreckage to get to her.

By the time they reached her, Norhailini had died.

She said Norhailini had been with Bumiputra Commerce Bank (BCB) since January 1991 and with CIMB since it merged with BCB in June last year.

Norhailini had been working at the Jalan Semantan office since December.

Her husband, Shuib Osman, said his wife had left home in USJ9, Subang Jaya, about 6am.

“Before leaving she asked me to take care of our youngest son who’s ill. I was then leaving the house for subuh prayers at a mosque.

“About 7.30am, I got news of her death,” said the 48-year-old pilot when met at the University Malaya Medical Centre mortuary.

Norhailini was buried at the USJ22 Muslim cemetery after Asar prayers yesterday. 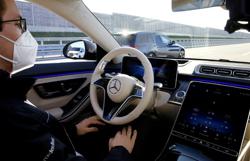