Kasitah claims trial to allegations of corrupt practice and cheating

By M. MAGESWARI and RAPHAEL WONG 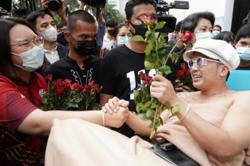 BY M. MAGESWARI AND RAPHAEL WONG

KUALA LUMPUR: Land and Co-operative Development Minister Tan Sri Kasitah Gaddam was charged in the Sessions Court here yesterday with corrupt practice and cheating, the first Cabinet member to be charged with such crimes.

He is alleged to have committed the offence at the Forum Meeting Room at the Fairlane Hotel here on Oct 22, 1996.

The charge, under Section 2 (1) of the Emergency (Essential Powers) Ordinance No. 22 1970, carries a maximum jail term of 14 years and a maximum fine of RM20,000, or both. On the second charge, Kasitah is alleged to have deceived the SLDB board by omitting to disclose to them the offer by PPB Oil Palms Sdn Bhd to allocate five shares of the company for each share of SAPI Plantations in the proposal by PPB Oil Palms for listing on the KLSE.

He thereby dishonestly induced them to approve the sale of 16.8 million shares held by SLDB in SAPI Plantations to Briskmark Enterprise whereas they would not have approved the sale if they had known about the offer by PPB Oil Palms.

He is alleged to have cheated the Board members, at the same time and place.

If convicted, he faces a maximum five-year jail term or a fine or both.

Kasitah entered the courtroom at 11.15am and several minutes later the charges were read to him by a court interpreter, to which he said he wanted to claim trial. Abdul Gani told the court that both sides had agreed to RM1mil bail with one surety, adding that RM500,000 had to be deposited as security.

He said that Kasitah should also surrender his travel documents to the court as an additional bail condition.

Shafee urged the court to waive that condition, saying his client had other duties and positions.

He added that there was no possibility of Kasitah absconding as he held a respectable position.

At this juncture, Abdul Gani said equality before the law should be observed irrespective of a person’s position.

“The number of shares involved is 16.8 million, of which Kasitah was promised 3.36 million.

“I have no evidence now, but I would say that the amount of shares is equivalent to RM24mil. Therefore, I seriously object to Kasitah retaining his travel documents,” he said.

Abdul Gani then tendered a document under Section 418a (1) of the Criminal Procedure Code to transfer the case to the High Court as the related case in Kota Kinabalu would also be transferred here.

Shafee said he reserved his objections, as he had no facts of the case to do so.

The minister arrived at the courthouse at 10.50am from the ACA headquarters in Putrajaya accompanied by two ACA officers.

After alighting from his silver Proton Perdana, he was taken by police through the tunnel leading to the court and taken to the lock-up.

The court had been packed as early as 8am.

Kasitah looked pale and slightly tense when he entered the courtroom from the lock-up.

However, after chatting with Shafee for several minutes, Kasitah appeared to have settled down and even smiled.

After the proceedings ended, Kasitah gave his cellphone number to Shafee, who suggested that he sit outside the dock, but he declined.

Shafee jokingly said: “You like to sit here?” to which Kasitah gave a hearty laugh.

The defence team then spent several minutes with the minister in the Criminal Court 2 administration room before leaving the courtroom through the tunnel at 12.55pm escorted by ACA personnel.

Asked about the application to transfer Kasitah’s case to the High Court, Shafee said: “We don’t know yet because we are surprised by the events and we want to get further instructions before taking any action.”

“You cannot simply jointly try both men unless there are specific provisions, which was what the A-G had used.

“That it is the only forum, which is why it has to be transferred to the High Court,” he said.