KUALA LUMPUR: Four people, including a former executive of Putrajaya Holdings Sdn Bhd, were charged by the Anti-Corruption Agency with using corrupt means to secure a multi-million-ringgit project at the new government administrative centre in Putrajaya for a private company.

Two of them, Manshor Omar and Zainol Azizan, were charged in the Sessions Court here while Azaham Abidin and Farah Md Daud were prosecuted in the Ampang Sessions Court yesterday. All four pleaded not guilty to the charges they faced.

Manshor, 47, a former executive of Putrajaya Holdings’ tender and contract department, is accused of accepting four cheques totalling RM41,000 from the managing directors of Nafas Abadi Holdings Sdn Bhd between Sept 9, 1998 and Dec 23, 1999 as inducements to provide the estimated price of a project in Putrajaya.

The project, which proposed to design, construct, complete and maintain the Promenade of Linear Park 3 and the park between Parcels A and B of Phase One A of the new government administrative centre, was then to be developed by Putrajaya Holdings.

The amount received by Manshor served as part of an ultimate payment priced at 0.5% of the total project value.

He is accused of committing the four offences at Nafas Abadi’s premises in Taman Desa Bakti, Selayang.

He faces another charge with Zainol, 43, for asking from other officers of Nafas Abadi a payment priced at 1% of the total project value as an inducement to help the private company secure the project from Putrajaya Holdings.

They allegedly committed the offence at the Concorde Hotel in Jalan Sultan Ismail on March 25, 1998.

DPP Idham had asked that the cases and the one in Ampang to be jointly tried in Kuala Lumpur as they involved similar witnesses.

At the Ampang Sessions Court, Azaham, 52, and Farah, 34, claimed trial before Sessions judge Nor Afizah Hanum Mokhtar to a joint charge of accepting a cheque for RM15,000 from the managing director of Nafas Abadi as a payment to influence the chief executive officer of Putrajaya Holdings, Datuk Mohd Hashim Hassan, to award a tender for the same project to Nafas Abadi. 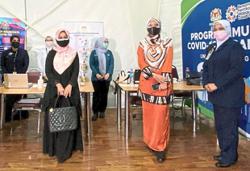