Residents: It's the result of trees making way for houses

PETALING JAYA: Residents of housing estates near the site of Wednesday’s rockfall have more to worry about than just the short-term inconvenience caused by the partial closure of the New Klang Valley Expressway (NKVE).

They fear that such incidents would recur in view of possible deforestation of the area to make way for more housing projects on both sides of the NKVE.

For civil engineer Leong Kam Heng, the rockfall was clear evidence that he and other residents in the area had been right in campaigning for the protection of the Sungai Buloh forest, once gazetted as a forest reserve.

Residents, he noted, were concerned that the forest area – which runs along both sides of the highway – would be alienated for further development.

“Even without deforestation at the location of the rockfall or within close proximity to it, soil erosion has already happened.

“I shudder to imagine how destabilised the soil would be if we bulldozed the trees and destroyed the slopes nearby for further development,” he said.

Leong, who is Selangor Polo and Equestrian Club Residents Association president, said the Petaling Jaya Municipal Council Structure Plan indicated that the remaining 400ha of the forest would be replaced by more housing estates in the near future.

For more than a year, the association had been working closely with other residents associations – including those for Kota Damansara, Bandar Sri Damansara and Bandar Utama – and the Malaysian Nature Society (MNS) in lobbying to save the forest.

The Sungai Buloh forest, gazetted in 1898, and when it was degazetted in the early 1990s, swathes of greenery have been replaced by the highway and residential areas like Damansara Perdana, Damansara Damai, Sunway Damansara, Damansara Indah and Kota Damansara.

MNS executive officer Andrew Sabastian said what was left of the original 3,000ha of forest in the Land Office's records today was some 400ha marked as “Taman Botani”.

“The topography of the area has changed tremendously over the years.

“What we are asking now is assurance from the authorities that the remaining area marked as Taman Botani will be preserved,” he said.

Ironically, residents lobbying for preservation of what remains of the Sungai Buloh forest are among the pioneer batch that bought houses built on former reserve land as they were attracted by the “living in nature” concept. 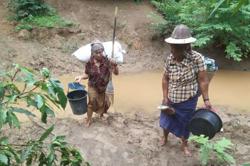