Abdul Kudus, 40, is accused of accepting bribes ranging between RM1,000 and RM12,000 on several occasions from restaurant owner Steven @ S. Sathiasilan at various locations here and in Selangor between May 2001 and May this year.

The money is said to have been given to Abdul Kudus as an inducement to withdraw the notice of licence cancellation and closure of business and not to take action against Steven for placing chairs and tables on the road in front of his restaurant.

According to the charge sheet, Abdul Kudus had on three occasions accepted bribes totalling RM12,000 from Steven through one A. Ravindar and once received RM1,000 through Koperal K. Ravintharan.

Abdul Kudus is charged under Section 10(a)(bb) and 11(a) of the Anti-Corruption Act, 1997, which carry a jail term of up to 20 years and a fine of five times the value of the bribe.

He pleaded not guilty to all charges before Judge Nor Afizah Hanum Mokhtar in a packed courtroom yesterday.

DPP Nordin Hassan of the Anti-Corruption Agency asked the court for a joint trial for all the 24 charges, saying that they involved the same witnesses and that it would save the court’s time.

DPP Nordin also asked the court to impose a bail of RM100,000 for all charges with one surety, taking into consideration the seriousness of the crime and that it was an non-bailable offence.

Furthermore, he said, there was a possibility of the accused failing to turn up on the trial date.

Defence counsel M. Manoharan, citing several grounds, asked the court to release Abdul Kudus on a personal bond or on a RM1,000 bail with one surety.

The grounds, Manoharan said, included that Abdul Kudus’ father, Ahmad Madun, 66, was an imam and that he had retired from government service.

He also referred to Abdul Kudus’ military service, saying that the accused had fought for the security of the country.

Manoharan said the court should also take into account that Abdul Kudus had a wife and seven children, six of them in school.

“My client has no source of income now after his service at the MPAJ was terminated and it will be unreasonable to ask him to post a high bail,” he said.

He also said that Abdul Kudus would not abscond because he wanted to clear his name and that “he had been tried before the press and this matter had been highlighted by a deputy minister.”

Manoharan also claimed that the prosecution had delayed legal action because the charges were not serious.

He asked the court to consider that 15 of the bribes amounted to only RM1,000 each.

Abdul Kudus pleaded guilty in a magistrate’s court on July 12 to making a false statement in declaring that he was not a bankrupt when he accepted a post in the local council in 2001. Sentencing for the case will be on Sept 2.

Abdul Kudus was sacked from the MPAJ in June for failing to declare his status as a bankrupt when he accepted his post.

He had been declared bankrupt by the Kuala Lumpur High Court for failing to settle debts of RM12,533.45 with Bank Bumiputra Malaysia and RM12,463.96 with Arab Malaysian Finance. 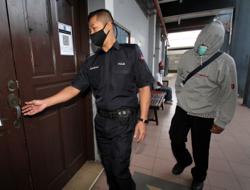