More rainfall than in a month 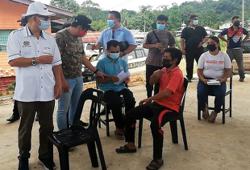 KUALA LUMPUR: The three-hour downpour on Tuesday recorded more rainfall than in an average month in the Klang Valley, with the heaviest showers in the Sungai Gombak, Sungai Klang and Sungai Ampang catchment areas.

The intense, widespread rainfall in these places was the main cause of the massive floods - the worst since the last big floods in June last year, according to City Hall.

It said unusually high rainfall was recorded at the three places at 4pm and 5pm.

In the earlier readings, the rainfall rate at Sungai Gombak was 95mm/hour, Sungai Klang 41mm/hour and Sungai Ampang 20mm/hour.

In a statement, City Hall said incessant rain throughout the Klang Valley caused the river tributaries to bring water directly into the city centre.

“This phenomenon made the drainage system involving Sungai Gombak, Sungai Klang, Sungai Bunus and Sungai Kerayong inadequate to handle such excessive and fast-flowing water with its hydraulic capacity, causing the rivers to burst their banks.

“The water levels were too high and even blocked the water from major drainage lines from flowing into the rivers.

“This caused low-lying areas, roads and villages along the Gombak and Klang rivers as well as along major drains to flood,” City Hall said.

By 5.30pm, waters from the main rivers had overflowed and flooded at least 23 locations.

City Hall said some of the affected areas had never been hit by floods previously.

Among the areas which suffered from the swelling rivers were the LRT station near the Putra World Trade Centre and nearby Tiong Nam, the LRT Bandaraya station and the nearby Sogo shopping mall and the Jalan Raja area covering Dataran Merdeka and the High Court.