18 students from SARS countries under quarantine

KUALA LUMPUR: Eighteen foreign students have being quarantined in accordance with the guidelines for the prevention of Severe Acute Respiratory Syndrome (SARS) for institutions of higher learning which came into effect on Sunday.

Health deputy-director general Datuk Dr Ismail Merican said the students, who had arrived here at different times, were placed in accommodation provided by their respective institutes.

“Most are from China and are being housed in hostels,” he said during the daily SARS briefing at the Health Ministry yesterday.

Of the 18 students, one was enrolled in Universiti Malaya, four in the International Islamic University (UIA), five in Universiti Teknologi Mara (UiTM) and the remainder in various private institutes.

“I want to emphasise that this quarantine is carried out under the guidelines for students. It is different from home quarantine which is done for people who have had contact with SARS patients,” he said.

The guidelines, issued on May 16, require all new and returning students from SARS affected countries, namely China, Hong Kong, Taiwan and Canada (Toronto), to undergo a 10-day quarantine.

On calls by private institutions of higher learning for the setting up of a centralised quarantine facility, Dr Ismail this would be referred to the National SARS Committee.

“However, I don’t think it is an issue now as not many students are involved,” he said, adding that the private institutions should be able to manage the small numbers who had to be quarantined.

Although there had been eight straight days with no SARS cases being reported, Dr Ismail reiterated that everyone should not let their guard down. 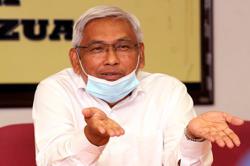