Judge Hamdan Indah made the ruling after factory operations manager Chong Kok Wui pleaded guilty on behalf of the company to dumping ink sludge – a scheduled toxic waste – in Bukit Bulat Felda estate, Alor Gajah, at 9.30am on Jan 2.

The factory was charged under Section 34 (1) (a) of the Environmental Quality Act 1974, which carries a maximum sentence of a RM500,000 fine or five years' jail, or both, if convicted.

Counsel for the factory Lau Weng Ann asked the court for leniency, saying that it was the company’s first offence and that it had also pleaded guilty.

State Department of Environment deputy director Wandi Yadzid Yaakob, who prosecuted, said the factory had been dumping toxic waste since July 2001 and at least 80 barrels of toxic waste were recovered from the site.

He added that the toxic waste would be detrimental to the quality of the water in the river nearby.

The department had received a complaint on Jan 2 at 8.45am that ink sludge was dumped at Felda Machap, Bukit Bulat, Alor Gajah.

Findings showed that the ink sludge sample from the factory and the dumpsite were similar, and that the factory had been disposing of the sludge without approval from the authorities.

The factory paid the fine. 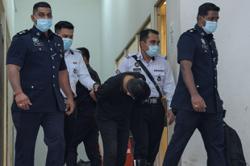