The wrath of Iran’s women

Herstory: An unveiled woman making her point as thousands travel towards the cemetery in Amini’s hometown on Oct 26, defying heightened security measures that are part of a bloody crackdown on Iran’s women-led protests. — User-generated content/Twitter/AFP

WHEN Mahsa Zhina Amini, a young Kurdish-Iranian woman, was arrested by Iranian police for not wearing a hijab her brother was told she’d be detained for a few hours and released. Three days later she was dead.

Iran’s notorious “morality police” – whose job it is to make sure women wear veils in public – have been accused of beating Amini, 22, so badly she went into a coma within hours of her arrest and had to be taken to hospital, where she died on Sept 16.

Amini’s death sparked the largest protests seen in Iran since the foundation of the Islamic Republic of Iran in 1979. Hundreds have been killed as thousands marched through the streets telling Iran’s supreme leader and the regime itself to “get lost”.

The Iranian government has long been accused of perpetuating gender-based violence. The compulsory veiling mandate, suppression of gender and sexual minority groups, patriarchal family laws, legalisation of child marriage and the lack of laws against domestic violence are only a few examples of the authorities’ general attitude toward women. These laws have also contributed to vigilante and police violence against women.

As protests about Amini’s death and the treatment of women raged through Iran, a petition to expel Iran from the United Nations Women’s Commission was posted on Change.org, receiving more than 143,000 signatures. It continues to grow (as at Nov 21). Advocacy bodies have also called on the UN Economic and Social Council to expel Iran from the UN Commission on the Status of Women.

Iran is one of six UN member states that has not signed the Convention on the Elimination of all Forms of Discrimination Against Women. Following arduous years of debate and campaigning by Iranian women’s rights activists, the Iranian Parliament passed a Bill to join the Convention in May 2003, but conservatives in the government blocked it.

Iran’s laws have enshrined discrimination against women in employment, marriage and citizenship. Still, the fight to recognise violence against women has continued.

In 2021, a new Bill on the elimination of violence against women was proposed but has yet to be passed. The Bill would make it legally possible to prosecute men who commit violence against women and children, specifically in domestic situations. But conservatives are actively blocking the Bill because they interpret it as Western and incompatible with the country’s patriarchal views on gender and family.

While violence against women has no specific legal status, it doesn’t mean that it goes unpunished. However, the lack of legal status makes it difficult to charge a perpetrator in an Iranian court. This lack of recognition means reporting violence against women, including domestic violence, is rare and official support for victimised women is scarce. The situation is made more difficult by the lack of official statistics. The numbers that are reported by government officials are widely believed to be inaccurate.

Organised and publicly visible activism to end violence against women has been part of the Iranian women’s movement’s agenda but has largely remained unorganised. By remaining scattered and disorganised, the women’s movement is less vulnerable to attack and suppression. The atmosphere of risk and fear has given rise to different forms of implicit and grassroots activism. Social media and #MeToo activism have specifically been grassroots initiatives and reliant mostly on ordinary Iranians. 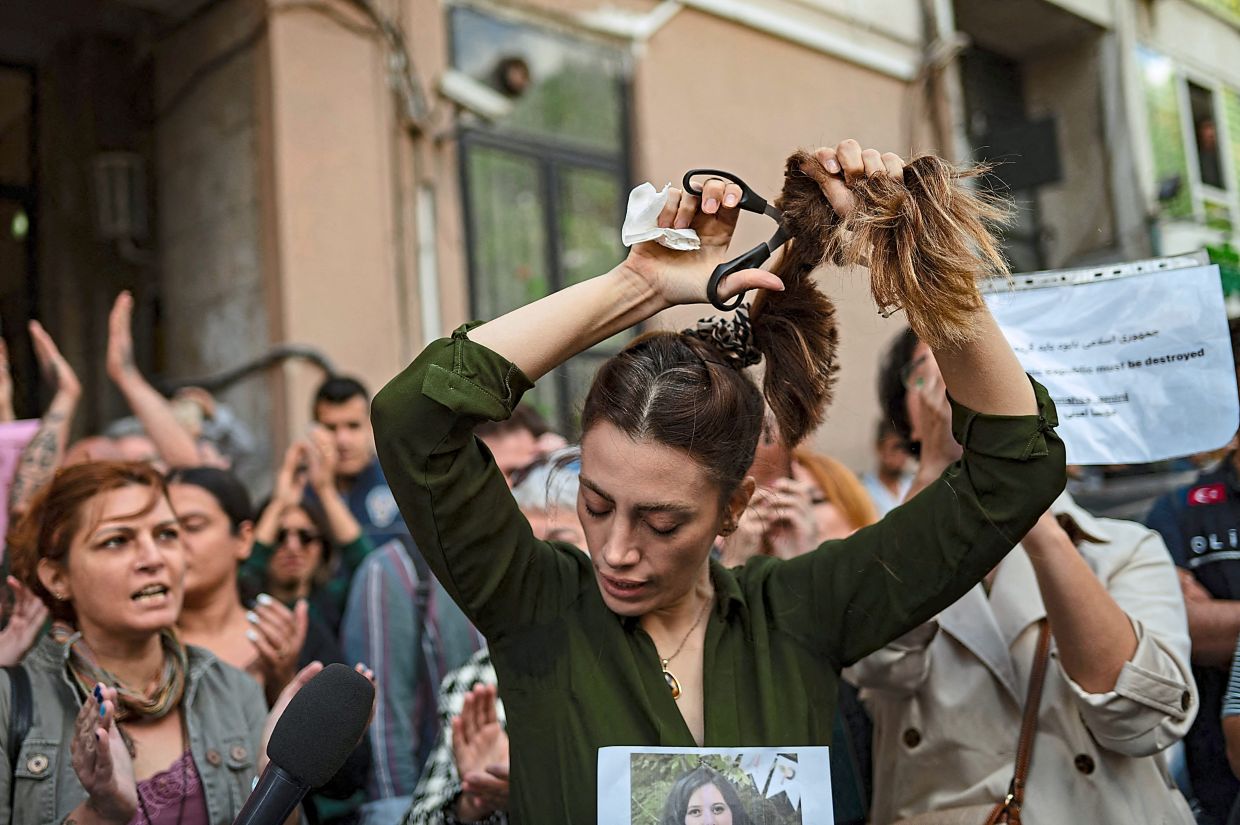 Nasibe Samsaei, an Iranian woman living in Turkey, cuts her ponytail off during a protest outside the Iranian consulate in Istanbul in September following Amini's death. Iranian women around the world have joined in protesting gender-based violence in Iran where wearing a veil is mandatory. -- AFP

On the other hand, social media campaigns and cultural productions are forms of resistance and disobedience that can create a smaller scale societal impact, called implicit activism. Implicit activism is a less public form of activism and is common in countries where political or human rights activism is risky and the identities of activists must remain hidden.

There are signs of activism having a nationwide impact. While state-run Iranian TV mostly offers homogeneous and traditional portrayals of women on screen and normalises discrimination, Iranian cinema has addressed the issue in more depth. Violence against women and the problems of gender-based discrimination have been recurring themes in Iranian post-revolutionary cinema.

Substantial attention has also been given to violence against women in academic scholarship. The number of master’s and doctorate-level dissertations written on women’s issues, including violence against women, has been so overwhelming that Iranian universities have discouraged students from researching the topic, especially as the findings and policy implications are rarely taken up by authorities.

Studies conducted by prominent Iranian researchers such as sociologist Shahla Ezazi and legal scholar Mehangiz Kar have been influential to a new generation of scholars who continue to form a vast body of work on the topic.

As Ezazi says, much attention has been given to individual factors and interpersonal relations as the underlying cause of violence against women. This approach depoliticises the problem and is essentially a survival strategy.

Researchers often use individual and family-oriented analysis that often finds social factors like addiction, unemployment, lack of and education to be correlated with committing violence against women, allowing them to discuss the issue without upsetting the state.

While tackling violence against women in Iran requires extensive social and cultural reform, there seems to be a growing consensus among activists and ordinary Iranians that the most prominent obstacle to progress is the nation’s traditionalist view of gender.

Gender politics, such as the compulsory veiling law, are a fundamental part of the national identity. Reform has been impossible, leading many Iranians to believe that fundamental changes will not be possible unless the regime collapses – a central demand in the ongoing uprising. – 360info

Ladan Rahbari is an assistant professor at the Department of Sociology, University of Amsterdam, and a senior researcher at the International Migration Institute. She is a member of Amsterdam Young Academy and a board member of the Amsterdam Research Centre for Gender and Sexuality. This article was originally published under Creative Commons by 360info.