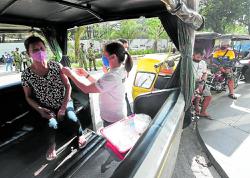 Duterte gestures as he addresses land reform beneficiaries on the 31st year of the implementation of the Comprehensive Agrarian Reform Program (CARP) in suburban Quezon city northeast of Manila. - AP

PRESIDENT RODRIGO Duterte may go down in Philippine’s history as one whose presidency was marked by the grandest promises and the most glaring failures. Yet, opinion surveys suggest that he may end his term with the highest approval and trust ratings among all our presidents since political surveys began to be conducted.

This just goes to show that charisma and competence are two different things. One doesn’t imply the other. The failure and imperfections of charismatic leaders are not necessarily counted against them. Their followers are seldom interested in knowing what they have actually achieved.

How exactly has Duterte, as president, made Filipinos feel? It’s difficult to generalise. Many people I know only feel deep shame that we have elected and allowed ourselves to be governed by a leader whose crass speech and bizarre behaviour have been without parallel. To them, the incompetence, unaccountability, corruption, and violence that have stood out as hallmarks of the Duterte brand of leadership have brought the nation to near ruin.

This seems, however, to be a minority view — if the opinion surveys are to be believed. The majority appear to think differently. They see Duterte as a leader who awakens in them a sense of potency — just by the manner in which he is able to mock, disrespect, and intimidate the powerful.

To those who have lived without power and hope, he offers a foretaste of a social order where fortunes are reversed. They view him as a strongman driven by a mission to once and for all rid the nation of its problems — poverty, inequality, corruption, criminality, the drug menace, etc.

It doesn’t matter that this vision is neither spelled out in concrete programmes nor attained. It is the eloquence of the resentment and bravado behind it that is not forgotten. How this happens, and why, is what the sociology of charisma is about.

The German sociologist Max Weber took the concept of charisma from St Paul’s account of the early Christians. In its religious context, the term meant “gift of grace,” a divinely conferred talent or power. Weber borrowed the word to describe one of the three ways of legitimizing authority. The other two are: traditional authority based on custom, and legal-rational authority based on law.

Being a sociologist, Weber regarded charisma as a social relationship between leader and followers, rather than as something synonymous to a leader’s “magical” capabilities, or dependent on the individual beliefs of the followers. It is the social context in which it is embedded that he was keen to understand.

For the most part, Weber saw charisma in the context of traditional society, rather than in relation to the modern state. But the fact that so-called charismatic leaders have also emerged under modern conditions has led political analysts to delve deeper into the mechanisms and circumstances that permit some influential individuals to break through the boundaries of established systems of elite rule. What is behind charisma?

For such an analysis to prosper, it is important that we disabuse our minds of the notion of blind and ignorant followers who are unable to listen to reason. For, indeed, ordinary people often grumble wisely about their leaders.

What seems to be emerging from recent literature on the subject are two things. First, charisma seems to be more a function of later success, than a determinant of political dominance. Many so-called charismatic leaders started out as unremarkable local players in limited political environments where other leaders could easily have stood out above the rest. Second, and this seems to spell the difference, charismatic followers and leaders are created by mass media. It is those whose message is carried by new and better means of communication that manage to reach incredibly large audiences and thus gain a mass following.

In this regard, it is worth asking to what extent Duterte’s outsize persona is a product of YouTube and Facebook. While he was already a legend in Davao and widely known in Mindanao as a no-nonsense leader who got things done mainly by ignoring legal protocols, the rest of the country that voted for him hardly knew him.

His campaign sorties in 2016 unexpectedly drew large spontaneous crowds that came to hear the irreverent and foul-mouthed politico from Davao. But these gatherings were nothing compared to the virtual mass of supporters from all over the country that got to “know” him through the video recordings of these public meetings that were posted on social media. Even as he entertained his audiences by his colourful language, he also stirred in them a desperate yearning for redemption.

This would account for his lightning rise in the opinion polls, eclipsing all the early frontrunners for the presidency in the final stretch of the 2016 electoral campaign. Once he won the presidency, his charisma was confirmed. There was nothing he could say or do that could dent his popularity.

The good news is that while the Duterte presidency has weakened some of our modern institutions, it has not been able to replace the political order enshrined in the 1987 Constitution. It would be a different matter if he had been able to form a mass movement, like Hitler’s, whose leaders took over the ramparts of the state. — Philippine Daily Inquirer/ANN 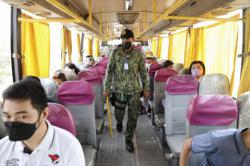 Asean is poised for post-pandemic inclusive growth and prosperity – here’s why
Filipino environmental defender calls for more coastal greenbelts
Malaysian-made Covid-19 vaccines to cover new variants
Cover 80% of population by Feb to outpace Omicron
When an anti-vaxxer dies of Covid-19
The ruthless Crown
A strange new symptom of the omicron variant has emerged: Night sweats
The QUAD adjusts towards Asean
US must correct mistakes to revive Iran deal, says China Daily
Eliminate violence against children