You need to lose 10 pounds.

You should kill yourself.

Her teen patients see comments like these on social media all the time, said Katherine Glaser, a licensed clinical social worker at Thriveworks Counseling in Tampa.

“People say things that they wouldn’t say in person because they get to hide behind a screen,” said Glaser, who treats teens and young adults.

And many teens spent the pandemic behind screens. Unable to see friends or pursue interests outside of the home, many young people resorted to more time on their phones. That led to an increase in harmful behaviours on social media, experts say, including cyberbullying and being inundated with idealised images of people’s lives.

Data shows that many teens are dealing with mental health issues. The national average of weekly visits for suspected suicide attempts among people ages 12 to 17 jumped nearly 40% in February and March compared to two years before, according to the Centers for Disease Control and Prevention. According to the World Health Organisation, more than 700 000 people die by suicide every year. Furthermore, for each suicide, there are more than 20 suicide attempts.

12% rise in calls and emails to Befrienders KL

Caution before abolishing law on suicide

Cyberbullies are most brazen on Snapchat, Glaser said, because the app automatically deletes images and messages after they’ve been viewed. She reminds her patients that nothing shared on the internet is completely secure.

One of Glaser’s teen patients told her she shared an explicit personal photo with someone through Snapchat, then learned that the image was screenshotted and distributed among her peers without her consent.

The teen ended up in the emergency room for self-harm and suicidal ideation, Glaser said.

Past generations of kids could escape in-person bullying by going home after school, Glaser said. But the pervasiveness of social media means today’s generation can be cyberbullied anywhere, anytime. That kind of harassment can feel inescapable.

A 2018 University of Pennsylvania study divided 143 undergraduate students into two groups. One group had to limit their social media activity to 30 minutes per day. The second group spent their usual amount of time on social media.

After three weeks, researchers found the group that limited its social media experienced a significant reduction in depression and loneliness.

Social media gives users the “illusion of connection,” said psychologist Melissa Hunt, the study’s lead author and associate director of clinical training at the university’s Department of Psychology. It also takes away time that could be used spending quality moments with friends and family.

Extensive social media use also encourages “upward social comparison,” Hunt said, or comparing oneself to someone the user perceives to be superior. That can lead to self-loathing and depression.

Social media influencers – individuals with large online followings who are paid to promote products and services – are part of the problem, Burns said.

They aren’t famous musicians or movie stars, Burns said, but they’re not regular people, either. Influencers, most of whom are thin, conventionally beautiful women, are often seen wearing the latest trends, enjoying lavish vacations and staying in expensive hotels. Their posts show clear skin, fresh manicures and their beautiful friends.

Burns reminds young women to avoid being sucked into what they see: Companies pay or send influencers free products for them to promote online. Photos often go through multiple takes and edits before being posted. Many are advertisements that aren’t labelled as such.

“These are unrealistic expectations for how most people can live their lives,” Burns said.

There are other indicators that Gen Z are more subsumed by consumer culture than previous generations, Burns said. While teens of yore consumed their ads through TV, radio and magazines, they did not carry their media with them in their pockets and everywhere they went.

Companies also are showing consumers exactly what they want to see. Tracking technology can collect each user’s internet history from site to site and help advertisers target them with tailored ads.

These idealised images allow advertisers to convince consumers to spend money on their products, Burns said. But too much of that exposure can make people feel like their own lives are constantly lacking.

Self-image is another issue. Before cell phones, people had to seek out ways to see themselves, such as walking by a mirror or having someone take their photo.

Today, most cell phones have cameras. From selfies and mirror selfies to photos or videos taken and posted by friends, Burns said, young people are constantly exposed to seeing what they look like.

Such self-scrutiny can lead to negative self-esteem or an unhealthy fixation on appearances. Snapchat and Instagram filters don’t help, giving users the ability to enlarge their eyes or smooth and lighten their skin. That can cause young people to question their self-image even more.

A 2019 study of 118 young women showed that frequent social media users were more likely to feel unsatisfied by their appearance and to consider plastic surgery.

And in a study conducted a year later, researchers looked at Google search term data and found increasing online interest in noninvasive cosmetic procedures such as Botox, dermal fillers and body contouring among Instagram and Facebook users.

There are ways parents can protect their children from the negative influence of social media.

They should find out which social media platforms their children use, research each app and ensure they’re age-appropriate, said Michael Kelleher, supervisor of clinical care at Hillsborough County Public Schools.

Understanding how social media works, he said, allows parents to keep their kids from consuming too much media. They’ll also know when their kids are being cyberbullied and step in to help.

Families can watch for signs that kids are experiencing a decline in mental health – a lack of interest in activities children typically enjoy, declining grades or school attendance or withdrawing from family activities. They could be influenced by social media, Kelleher said.

If parents notice those signs, Kelleher said, they should first talk to their children and encourage them to open up. School counselors are also available if more support is needed.

Many therapists are no longer accepting patients due to an increased demand for mental healthcare during the pandemic, but families can request a psychologist referral from their primary care doctor and make an appointment weeks or months in advance.

Quarantined at home, 17-year-old Catherine Zorn spent most of her days on Instagram, Snapchat and Tik Tok last summer. Comparing herself to other people online contributed to her declining mental health, which ultimately led the teen to the emergency room in October last year. She shared her story with the Tampa Bay Times in July.

That summer, Catherine’s group of close friends also stopped talking to her. They never told Catherine why, and she said her worsening depression prevented her from reaching out.

Instead, she spent hours on Instagram looking at posts of them hanging out. Catherine felt left out and wondered why she wasn’t as skinny, pretty or happy as she perceived them to be.

“I would look at their social media and try to figure out what I did wrong,” she said.

Teens spend an average of more than seven hours a day on social media for entertainment, according to a 2019 study by Common Sense Media, an organization that helps parents and educators navigate technology. Experts say that’s far from a healthy media diet.

Hunt, the University of Pennsylvania researcher, suggests no more than 60 minutes a day.

Catherine said she’s working to retrain her brain while scrolling social media, per her therapist’s suggestion, to “feel happy for people who seem happy instead of comparing (herself) to them.”

She’s also a big fan of Olivia Rodrigo, the 18-year-old singer-songwriter who in May released SOUR, an album about the trials of teenagedom that she worked on during the pandemic. The song Jealousy, Jealousy focuses entirely on the negative impact of making superficial comparisons on social media.

Listening to Rodrigo’s lyrics helped Catherine feel like she wasn’t alone in her mental health struggles. she said. Her favourite is the first track, Brutal.

If someone tells me one more time

And I don’t stick up for myself

I’m anxious and nothing can help

And I wish I’d done this before

And I wish people liked me more. — Tampa Bay Times/TNS

Caution before abolishing law on suicide 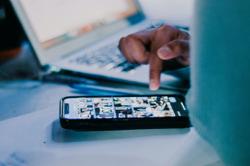