Chelsea fans protest against the European Super League outside the stadium before the match. — Reuters

AMERICA’S greed-drenched hedge fund billionaires and their unrelenting brand of late-stage capitalism can seem unstoppable, with the super-rich even adding to their massive wealth in the depths of a deadly pandemic. But made-in-the-USA greed finally met its match when it tried to take on England’s merry band of football supporters.

The recent scheme for a European Super League of that continent’s richest football clubs – enthusiastically backed by American billionaires like Arsenal’s Stan Kroenke, Liverpool’s John Henry and Manchester United’s Glazer family – looked very much like a Wall Street-leveraged buyout of the world’s most popular sport.

The moneyed owners huddled in secret with their bankers, JPMorgan Chase, which itself stood to make hundreds of millions of dollars, while players, coaches, and fans were left in the dark. TV deals and all the rest would make the 12 already elite founding teams even richer, while the scores of smaller clubs that are the backbone of football tradition would be left largely gasping in their dust.

There was only one problem with this 1Percenter move. The Other 99Percent hated it – even the fans of the dozen teams with favoured-nation status in the proposed new league. With England’s Chelsea scheduled for a match at its Stamford Bridge stadium two days after the Super League plan leaked, angry fans streamed out the pubs of western London and into the streets. A cloud of thick blue smoke – the kind normally unleashed when a Chelsea star like Pennsylvania native Christian Pulisic scores a goal – instead became a symbol of rage.

Hundreds of fans sat down on the main street outside the stadium and blocked traffic, in the kind of protest Americans are more used to seeing over racial injustice. They carried signs that read “RIP Football 1863-2021″ – a reminder of how much tradition means for fans of “the beautiful game” – or simply “The Ultimate Betrayal.”

The protests spread to other stadiums and other teams, with supporters of Liverpool and Manchester United saving the worst venom for their American owners (”[John] Henry, You have blood on your hands, ” read a sign in Liverpool). Star players began to voice support, and in less than 48 hours the European Super League collapsed.

Score one for the common man. A young fan walks away with a corner flag as supporters protest against Manchester United's owners at the club's Old Trafford stadium last week. — AFP

“The tighter the grip of monopoly capitalism exercised by the biggest clubs, the more utopian talk of returning football to the working class becomes,” the socialist magazine Jacobin exalted, one of many voices who saw the outcome as much bigger than football.

“But fans see football as their game, and they see it being taken from their hands by a moneyed elite, with big sponsors and broadcasters ruling the roost – and they are correct.”

On this side of the pond, the message rising out of the blue haze on Fulham Road should be crystal clear. From the Manchester derby to Upper Darby, middle-class people think that gross economic inequality and a super-rich willing to crush cherished traditions – be they historic football leagues or Main Street hardware stores and booksellers – have gone way too far.

That could not be better news for America’s new president, Joe Biden, and his surprisingly progressive agenda.

In his first-as-president address to a joint session of Congress on April 28, Biden rolled out the third phase of his roughly US$6 trillion economic plan, which is focused on expanded child care, mandatory paid-family leave and free community college – items that have sat idle on the progressive wish list for decades. But this Democratic president thinks he can finance the last, and toughest, US$2 trillion mile of his plan by making millionaires and billionaires pay for it.

He wants to raise the top marginal income tax rate back to 39.5%, or what it was prior to Donald Trump’s 2017 tax cut, while nearly doubling capital gains taxes on families earning more than US$1mil. Biden also wants to raise hundreds of billions more by tougher tax audits on millionaires and billionaires. “It’s time for corporate America and the wealthiest 1% of Americans to pay their fair share, ” he told Congress and the nation. “Just pay their fair share.”

Biden’s pitch is exactly the kind of thing that Republicans have swatted away for decades, by labeling any kind of tax increase – even on indolent hedge fund billionaires and their trust-fund babies – as an assault on free enterprise that would only benefit what they’ve branded as “the undeserving poor.”

This time, though, Democrats may be reading the blue-smoke signals from the other side of the Atlantic. Americans, like the British, are sick of watching the lifestyles of the super-rich and famous.

As with many things, the deadly global pandemic may have been the last straw. The New York Times recently published a look at whether Covid-19 – which devastated the US economy and caused millions of middle-class workers to lose their jobs – put any kind of damper on the pay of CEOs, whose compensation has soared from 35-times the average worker a half-century ago to ratios on the order of 320-1 today. You probably won’t be shocked to learn the fallout in the corporate C-suite was minimal to none at all.

An obscure Oklahoma CEO of a software firm called Paycom – Chad Richison (no, I didn’t make that name up), already worth US$3bil – took home US$211mil in compensation even though his company only made US$144mil in profit.

Tales from the battered hospitality industry were particularly galling in 2020. Norwegian Cruise Line, which lost US$4bil from canceled vacations and furloughed 20% of its staff, more than doubled the paycheck of its CEO, to US$36.4mil. That’s less than the US$55.9mil doled out to the boss at Hilton, which suffered similar losses and layoffs.

It feels like the average investor might consider buying stock in torches or pitchforks for 2021, especially when pandemic-altered consumer habits caused stock in a handful of near-monopoly high-tech firms – and thus the net worth of their already billionaire founders – to skyrocket. The world’s richest man, Amazon’s Jeff Bezos, is now worth about US$193bil.

The ghoulish economic trends aren’t exactly new. In 2011, or more than two years into a Great Recession, I wrote an article for the Philadelphia Daily News on eye-popping CEO salaries, also when the working class was suffering. At that time, I quoted an executive-pay expert – Eleanor Bloxham of the Ohio-based Value Alliance – as saying the corner-suite payouts were “insane.”

So I recently rung Bloxham back to ask her what she thought about 2020′s numbers. She responded: “Completely insane.”

Bloxham told me that next to nothing had happened in the intervening 10 years to upend the cozy and symbiotic relationships between CEOs and their affluent board-member peers who set their salaries and stock options, or bring pressure from everyday stockholders or government regulations. She called it “the compensation-industrial complex” and said at this point the best hope for a saner CEO-to-average-worker pay ratio is probably lifting the bottom – like the US$15 minimum wage now stalled in Congress – rather than restricting the top.

Which is why Biden’s tax-the-rich strategy seems perfect for the current moment. At this time in late-stage capitalism, the only thing left that makes sense regarding the 1Percent and their obscene wealth is to start taxing more and using the proceeds for programmes that create a wider middle class of better-educated citizens, with more freedom to work while supporting a family. And the public finally gets it. Taxing the rich is both popular and bipartisan, with most polls showing about two-thirds of all voters and even about half of Republicans supporting the concept.

That won’t stop the GOP party establishment – which depends on the largesse of these millionaires and billionaires to finance their reelection campaigns – from following their tired 1990s’ playbook.

If Democrats start to waver – as Democrats do, historically – they can look to our cousins in the United Kingdom for a pint of courage, and think about a back line of self-interested, clueless American sports magnates who just committed a spectacular own goal. — The Philadelphia Inquirer/Tribune News Service 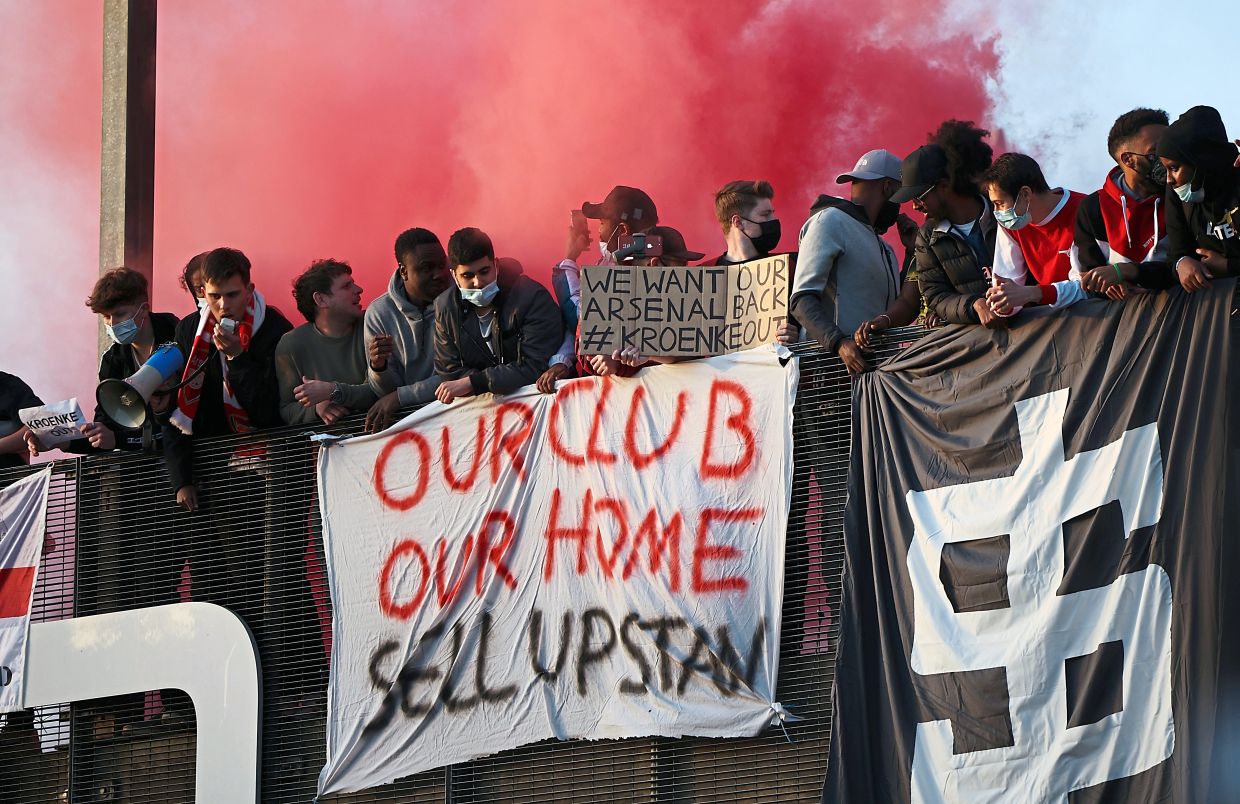