Moon and his wife, Kim Jung-sook, casting their early votes for the April 7 Seoul mayoral by-election in Seoul. — AP

AS of this writing, polls were open in by-elections for mayor in Seoul and Busan. The election offered a chance to assess public opinion only 13 months before the next presidential election in May 2022. President Moon Jae-in’s approval ratings have dropped recently, suggesting that his ruling Democratic Party may face strong headwinds moving toward 2022.

The problem with South Korea’s single-term presidency is that the president loses influence in the last two years, but most severely in the last year. The Korean media borrowed the term “lame duck” from the US media to describe a weakened president near the end of his or her term. The lame-duck period often produces scandals that cause criminal investigations after leaving office. Of the six former presidents elected from 1987 to 2012, three were jailed and another committed suicide amid an investigation. Sons of the remaining two were found guilty of corruption.

The important question here is whether this is structural or personal. If it is structural, then President Moon may face a similar fate. If it is personal, then, he has a chance to change the direction of history in a positive direction.

South Korea of 2021 is not the same country of 1987. Over the last 34 years, South Korea has transformed itself into a prosperous democratic society. The country ranks near the top in the world in basic measures of success, such as life expectancy and educational attainment. Practices from previous eras that created opportunities for corruption have faded as the country has advanced and become more transparent.

To avoid the fate of his predecessors, President Moon needs to focus on the issues that matter most to voters. Barring a black swan event, two issues will define the rest of Moon’s term: the Covid-19 pandemic and the economy. The two are tied together because the economy can only fully recover when the pandemic ends.

South Korea has received wide praise for its handling of the pandemic and statistics bear this out. As of April 6,106,898 cases have been reported and 1,756 persons have died out of a population of 51,700,000. Compare this to Rhode Island, the smallest state in the United States, where I am now living. The state has 1,059,000 people but has had 139,549 cases and 2,632 fatalities. If the goal of dealing with a pandemic is defined as preventing the spread of the disease and thereby preventing loss of life, South Korea has done an admirable job.

The situation has changed with the development of vaccines. Vaccines are now rolling out rapidly around the world, but the pace has been slow in South Korea, where only 2% of the population has received at least one dose. By comparison, the rate in Britain is 46% and in the United States it’s 32%. Israel leads the world with 61% of the population vaccinated.

For countries where Covid-19 is widespread, vaccines are critical in stopping the spread and saving lives. With much lower case counts and more effective public health measures, South Korea is in a better position than most. The problem is that an explosion of cases now could change things quickly. In the initial stages of the pandemic, the city of Daegu was hit hard, pushing the healthcare system to its limits. The fear of an explosion of cases nationwide is driving public impatience over the pace of vaccination. 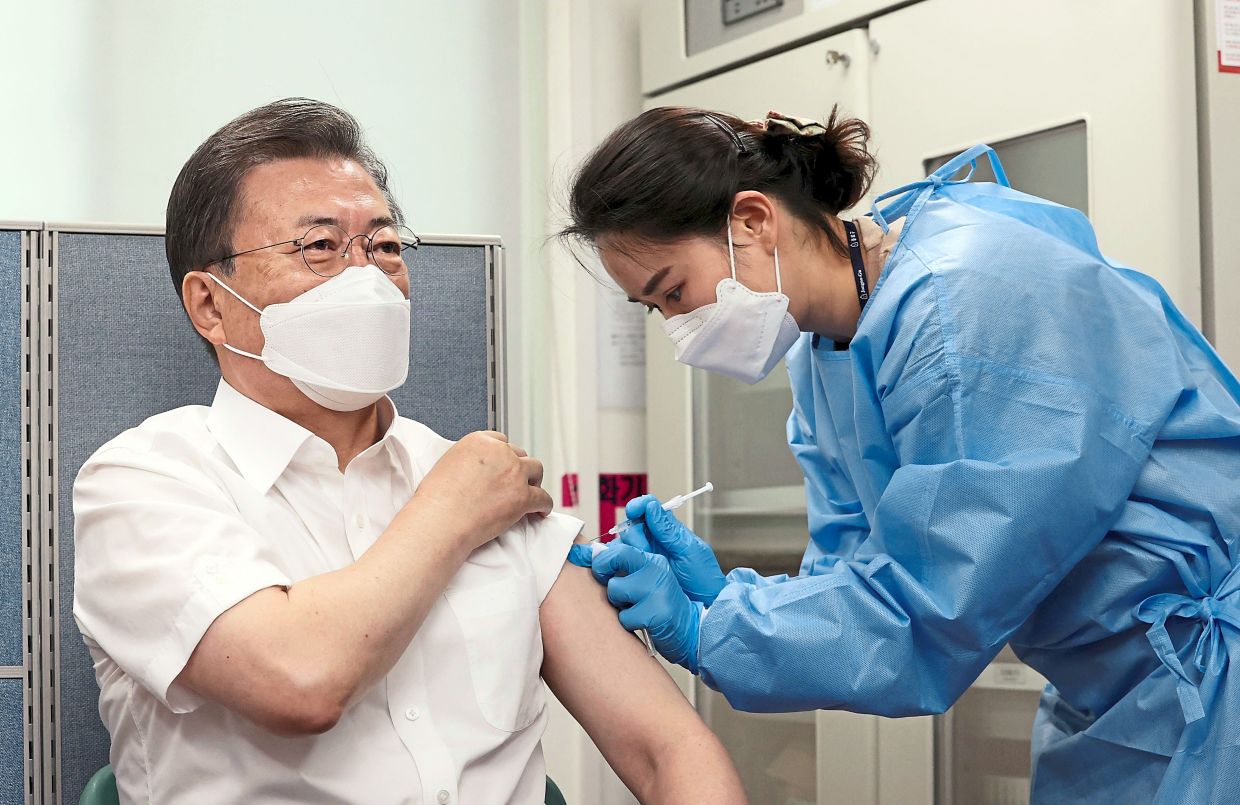 Moon receiving a dose of the AstraZeneca Covid-19 vaccine at a public health centre in Seoul in March. To date only 2% of the South Korean population has been vaccinated. — AFP

South Korea’s response to the pandemic in 2020 helped the economy avoid the sharp downturns experienced around the world, but it still shrank by 1%. The International Monetary Fund predicts that the South Korean economy will grow 3.6% in 2021 and 2.8% in 2022. This turnaround will help strengthen the labour market and improve conditions for small businesses that have been especially hard hit. A resurgence of Covid-19 would slow the economy again, risking prolonged economic damage.

(Moon’s party lost the mayorship of Seoul and Busan to the main opposition party, People Power Party on Wednesday. According to analysts quoted in The Straits Times, the Democratic Party’s crushing losses signal public disillusionment with numerous failed policies of the Moon administration, including its inability to curb soaring property prices, create good jobs for young people and eradicate deep-rooted evils such as corruption and power abuse.)

But, in the end, everything in 2021 centres on vaccinating people as fast as possible to end the pandemic. If President Moon can do that, he can arrest the decline in his popularity and leave office with a good reputation. And by doing so, he can set a new standard of governance for his predecessors to follow. – The Korea Herald/Asia News Network