Fighting together: After undergoing years of political instability, the Chinese community now yearns for stability to move forward.

ON March 7, Datuk Seri Dr Wee Ka Siong made a passionate call to Chinese voters to give the MCA support in his presidential address at the party’s general assembly. Since then, his appeal has

fuelled some reactions from the community.

While die-hard detractors have continued to rule out the MCA completely, others have engaged in serious discussions on whether the community still needs the MCA to represent their interest.

With the 15th general election (GE15) likely to be held after the Covid-19 pandemic is overcome under the current inoculation drive, any subject on GE15 stirs interest. And so does Dr Wee’s appeal.

And before he ended his text, he said: “I wish the Chinese community will give us full support so that we will be able to return to our glorious days.”

The Chinese print media gave his speech a full blast the next day, with the appeal as headlines.

Indeed, Dr Wee’s appeal is timely and urgent, given that the MCA – the only Chinese political party in Malaysia - was abandoned by the Chinese community in the last election.

In the 14th general election in May 2018, the MCA won only one out of 39 parliamentary seats it contested, and only two of 90 state seats.

Dr Wee was the only MCA candidate who won and became the MP for Ayer Hitam. The party grabbed another MP seat in late 2019 after winning the Tanjong Piai by election in Johor.

It was widely reported that in the 2018 election, 95% of the Chinese voted for the DAP – a Chinese-majority vocal opposition party. It won 42 parliamentary seats in the 2018 GE and became part of the Pakatan Harapan government from May 2018 to February 2020.

However, the party’s political fortunes began to slide when voters began to turn against the Barisan Nasional government due to its arrogance, corrupt practices and excesses.

The total rejection of Barisan came in the 2018 GE, after Umno leaders were hit by major financial scandals. Barisan lost the mandate to rule for the first time in the coalition’s history.

The 2018 election was a near total disaster for the MCA. Yet, under the leadership of Dr Wee, the party has soldiered. It did soul-searching and promised no repeat of mistakes made.

While in the opposition, Dr Wee served the country by articulating issues affecting the nation in general, and the Chinese community in particular.

The community began to look favourably at MCA when Dr Wee put up a strong fight against Lim Guan Eng, DAP’s secretary-general and finance minister under the Pakatan rule, for the removal of RM30mil matching grant for MCA-linked Tunku Abdul Rahman University College (TAR UC), which has provided quality education for poor Chinese students for 50 years.

The other MCA leaders have, in their own ways, provided service to the community and spoken up on national and topical issues although media coverage on them is not dazzling.

As a writer who has monitored developments in Chinese community, I can sense that the MCA is now a more spirited organisation compared to 2018 when morale hit the floor and members thought it was the end of the world.

Despite this, MCA leaders have continued to stay in touch with Chinese guilds and leaders to feel the issues and concerns on the ground.

There is indeed more life in the MCA now, particularly after the party won the Tanjung Piai by-election in which the TARUC issue had a sway.

But by now, the MCA must have learnt that no matter how hard it works for the community, there are two groups who will not support the party.

The first group consists of people who detest Umno, the big brother of Barisan. Two top leaders of Umno are involved in 1MDB and other financial scandals that are being heard in court.

And to this Chinese segment, as long as MCA does not leave the Barisan and cut off ties with Umno, their votes will never go to the party.

The other group comprises Chinese who still live in history. They believe past MCA leaders had not championed hard for Chinese education and their rights. They continue to judge current MCA leaders in similar light.

However, there are signs that many Chinese people have become more pragmatic after seeing DAP’s performance in government.

Many Chinese community leaders, who were initially very excited with the new government in 2018, have become disillusioned when the DAP leaders used their powers to hit out at MCA constantly instead of governing the country.

The removal of grants for TARUC to spike the MCA by Lim, DAP’s secretary-general and then Finance Minister, could not be forgiven even up to now. DAP leaders’ stance on Jawi issue in Chinese schools has also upset its own supporters.

And although the DAP boasts of 42 parliament seats, it could not resolve issues pertaining to UEC certificate recognition and stem the rise in racism and religious extremism.

This has resulted in Chinese taking a re-look at the MCA and its actions.

In fact, Dr Wee reiterated MCA’s stand on Chinese education on March 7: “MCA has always looked at education as something close to our heart. We have always handled education issues with sincerity, regardless of the criticism from the public.”

The MCA’s role in economic development is also given recognition. It had played a key role in bringing in China investments when the West shunned Malaysia after 1MDB financial irregularities came to light.

Last March, when current Prime Minister Tan Sri Muhyddin Yassin invited MCA leader to join his Cabinet in the Perikatan Nasional government, it went without saying Dr Wee was roped in to represent Chinese and to play a role in national development.

Although Muhyddin could have ignored the Chinese, the MCA now has one minister, four deputy ministers to represent the Chinese community in the Perikatan government.

The MCA, which advocates

moderation and inclusiveness, appears to be more acceptable to Malays than the more combative DAP.

But with the current political situations keep changing, Dr Wee is realistic about his expectations.

He sees the MCA performing better than the last election, and hopes the party could win more seats in the coming election.

And to win more seats, the MCA will have to put up credible candidates. These candidates will have to be clean, committed in serving the people and outspoken, as voters are more demanding now.

Without a doubt, Dr Wee is aware of the tough challenges ahead. At the AGM, he told potential candidates: “In the next GE, we must let others outside see our strengths, sincerity and responsibility. Within the party, we need to be united and energise our members to fight together against our opponents.”

From the survey outcome of Sin Chew Jit Poh and Sinar Harian released on March 11, there may be room for the MCA to sway voters if it puts up good candidates, though it is an uphill battle.

The joint survey showed that about 30% of Chinese voters among 24,370 people polled had not decided which political party to vote for.

In Sin Chew’s own survey on the performance of Cabinet Ministers after one year in government, its readers gave high marks to Dr Wee as Transport Minister, putting him as the 5th best Minister in terms of “degree of satisfaction”.

While the survey showed the DAP still commanded strong support among the Chinese, it also indicated falling support. The magical 95% was missing.

Political analyst Phoon Wing Keong, in his writing in Nanyang Siang Pau recently, has predicted a swing of Chinese votes back to MCA in GE15.

He said the rise and fall of Pakatan government and the recent results of the Sabah polls have made Chinese realise that they cannot bank all their hopes on Pakatan.

While it may be logical to expect more support for MCA on the ground, it is anybody’s guess how many more seats the MCA can win. Increased votes may or may not be translated into seats.

However, it will be safe to predict the seat occupied by Dr Wee in Ayer Hitam will be secure due mainly to his leadership, charisma, work for constituents and contributions to the nation. 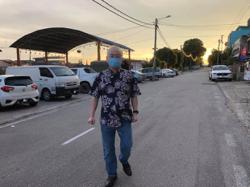